With the release of THE LAST JEDI, came a minor explosion of requests for interviews. Michael can only do written ones these days since losing his voice, but he does them via keyboard. Even our editor—Shelly Shapiro (aka She Whom We Adore)—has been pressed into service answering fan questions.

I’ve been interviewed now by five fan sites and a radio program out of Philadelphia, where my daughter attends college. (Podcast will be available on Suvudu, or at the Fictional Frontiers web site). I even got to blog on the official Star Wars site.

As I noted in the “official blog” (entitled “Ooo, shiny!”), being interviewed means answering questions, something some writers don’t much like to do, whereas others of us (me! me!) are always happy to talk about our creations and creationary processes.

There are certain questions that drive some writers batty, such as “Where do you get your ideas?” Or “What’s your writing process?” Or “What’s it like working with <your partner here>?” I even love those questions.

What I found this time around was that the caliber of questions from the interviewers were particularly toothsome. They had substance and asked me to get into material that lay underneath the story on the page.

Most Frequently Asked Question: How did the story/book/idea come about?

It came about because of an email that Michael had sent to our editor while we were working on our previous novel, STAR WARS: SHADOW GAMES. I think we’re both pretty invested in Jedi Knight Jax Pavan and his irascible droid, I-5YQ. Michael had sent a very brief pitch to Shelly sort of saying “Hey, what if…?” And as we were working on SHADOW GAMES, Shelly emailed us and said, “Hey, guys, do you want to write this book?”

Now, this doesn’t explain how the story evolved to take in all of the elements that ended up in the finished novel. That’s a far more complex and hard to define process that involves all the characters, their desires, fears, goals, and inter-relations … which I will get into in a future posting.

Most Unexpected Question: Which is harder to kill off emotionally, a beloved protagonist or an antagonist? 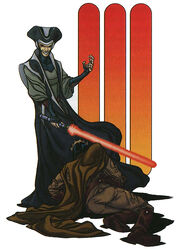 I had to really stop and walk myself through this one.  I was initially going to say it was easier to kill off an antagonist, but that depends on what you mean by “easier”. A key character dies fairly early in the book and it was hard to let go emotionally (even though the character does have a presence in the story even after death), but writing the death scene was “easy” in that I was able to put myself in the emotional viewpoints of the characters who witness that death and just write what came. I especially love that scene because it resonates emotionally for me. What was hard about it craft-wise was the fear of not having given the reader enough of the character alive for them to feel a connection.

Now, the antagonist who dies was easy to let go of emotionally, but it was harder from a craft standpoint because when you destroy a malevolent character, the death has to create a big enough MOMENT and be executed in such a way that there’s an emotional symmetry or rightness to it. This effects not just how that character dies, but who serves as the instrument of their death.

I am an I-Five fangirl. Five is more than the sum of his programming and why is kind of a mystery. He’s the Velveteen Droid; the puppet that becomes a Real Boy. I like Leebo, too, and writing him is fun. But it is different than writing I-Five. When I’m writing Leebo, I’m conscious of the fact that he’s a droid and that everything he says and does—however clever—really just comes back to his peculiar programming. That’s fun, because it’s a sort of constant word play and makes me have to think about his dialogue in a different way than I would for a sentient character. That is, I’m not thinking in terms of emotional responses, but logical ones, no matter how quirky.

I-Five is something else again. He’s not human, but he’s more than a droid. There’s a scene in LAST JEDI that sums that up for me. Jax has located Five by following his Force signature (which, as a droid, he’s not supposed to have), and finds him indulging in some rather emotional, un-droidlike behavior. The two have a conversation about loss in which it occurs to Jax to wonder how the droid “feels” about losing both an intimate companion and his original I-5YQ chassis in the same moment.

It’s really a conversation about identity. Jax has lost a piece of his identity with the death of a friend; I-Five has lost his entire material identity. Only now, does he stop to contemplate the fact that he has thoughts and feelings about this which have altered his behavior.

An interesting facet of this to me, in retrospect, is that both Jax and I-Five are essentially in disguise during this conversation—Jax as a Ubese merchant; Five, as a DUM pit droid. Until I began to answer this question, I didn’t consciously realize that I had them discussing identity while neither of them were physically “themselves”.

And that is one of the things I love about writing … and answering questions. I also like that questions like these (and others I hope to share) have made me a fan of my fans and turned our dialogue into a mutual admiration society.

Next Q&A: To what extent did your beliefs shape the view points of the characters?