A departure from our regularly scheduled broadcast to talk about what the elements have shown us. 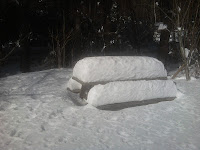 Friday night we had the 2013 blizzard: close to two feet on bare ground. The governor declared a state of emergency and no one was allowed to drive on the roads: up to 1 year in jail and a $500 fine.

So we stayed home and watched the snow fall. Next day we got up and began clearing away the snow. Here are a few pictures of what we did. 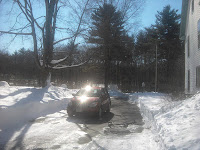 First, of course, we had to make sure we could get out.

As always this was made more interesting by the actions of the snow plow. Usually I cut a path under the maple to refill the bird feeders. Since that was where the snow blow threw the snow I decided this time they had to fend for themselves. 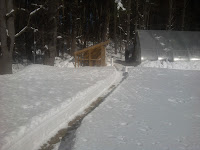 We also had to cut channels to get to the chickens and the greenhouse. 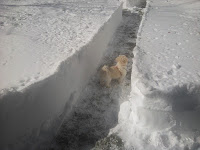 Not to mention a place for poor Penny to do what must be done. 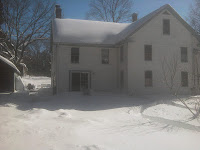 By and large, however, we came through pretty unscathed. We have a couple of feet of snow on the roof and we can get everywhere we need to. No loss of power to speak of– though we had the generator ready. Number 1 snow blower did most of the work before it failed but we had Number 2 snow blower to finish. When the weather warms a bit I’ll bring in Number 1 and see what happened. I suspect it is just a belt adjustment.

That’s the rumors behind the news.