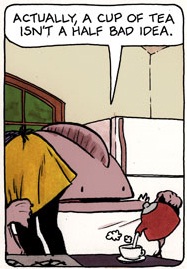 I follow about four hundred web comics. A bunch of them can be seen here.

Fortunately, the update schedule for most of these brings it down to about fifty or so a day. Is that a lot? Not sure. It takes me about forty-five minutes or less to get through them. Maybe I just read fast. Or, at least, read comics fast.

At any rate, I’m going to start a new subthread on this blog. I’m going to talk about certain webcomics that I follow.

One of the problems of webcomics is that there’s not a good mechanism to pay the authors for their time and trouble. (In my example, if I paid a dime to each webcomic I read every day it would costs me $5/day or $1800/year. I can’t afford that.) While this can mean that webcomics creators are free from deadlines, publishing oversight, etc., it also means it’s a labor of love unless and until they make some money on it. There are some definite success stories in webcomics (PVP and Sluggy Freelance leap to mind) but many webcomics just last until the life pressures on the creator consume them.

Another scenario is that a given webcomic starts, goes for a period and then is actually ended. (My God! A comic that actually has an ending!) A terrific example of this is Anders Loves Maria by Renee Engstrom, a wonderful story that has an actual beginning, middle and end. You know. Like a story. Another is Ursula Vernon who wrote Digger. Digger won the Hugo in 2012.

Often, webcomics have support mechanisms embedded on their site. This can be print versions or donations or other means.

So. Here is today’s list and discussion. Go read them. If you like them, figure out a way to support them.

Since Science Fiction webcomics are relatively rare, I’ll talk about them today.

Cleopatra in Space: Take Queen Cleopatra from Egypt. Put her in space cadet school. Send her out for adventures. That’s pretty much it. The bad news is it doesn’t update enough.

Darths and Droids: Imagine Star Wars as a D and D game. You remember them, right? You play in your living room and all sorts of things happen? Some of them within the game like killing rebels or something. But personalities come out. Marriages come and go. Little sisters grow up. Now imagine that using as illustration actual pictures from the Star Wars movies.

Blue Milk Special: Same Star Wars venue in that the same rough plots are followed. But Leia is a rough girl who smokes and is tougher, much tougher, than Han. Han, for his part, bumbles. Think of it as an orthogonal reimagining of Star Wars. Man, I never thought I’d get to say “orthogonal” quite that way.

Decrypting Rita: This comic is, in part, science fiction. It’s the life of a woman over several planes of simultaneous existence. In one she’s a robot. In another she works in a store. You get the idea. The comic is drawn with these pieces of her “life” crossing over themselves. The character doesn’t seem to interact with her other selves but the art does.

Dresden Codak: A terrific comic that doesn’t update enough. It’s fringe SF rather than true SF. Aaron Diaz plays with scientific concepts and art at the same time. He had one long arc, the Hob story, that is closer to true SF than most of the arcs.

The End: This is straight SF. Aliens have a humanitarian mission. When they see the end coming they save some of the species. Our number is up.

Freakangels: One of the ended strips This one is by Warren Ellis who’s done a lot of other things in the entertainment industry. Remember Village of the Damned or The Midwich Cuckoos? TMC was  a story about psychic kids that resulted from alien intervention. VOTD was the film version. At the end of both the kids are killed. Now imagine they lived and grew up. That’s Freakangels.

Freefall: Freefall has been around forever. It’s basically about a larcenous squid starship captain and is first mate an AI housed in a humanized wolf body. It’s very funny. It also usually gets the science spot on.

Galaxion: This one is a more traditional SF story. Woman is an admiral. Her husband was captain of a crew testing a new star drive. They disappear. She finagles an appointment to a new star ship to go after him. She finds them. Sort of.

Jump Leads: Parallel universes abound. We have trading relations with many of them. We’re always looking for new ones. The explorers are called Jump Leads. Two of them (a sort of Lister/Rimmer pair from Red Dwarf) get lost and try to find their way home. Think Sliders done right.

Moon Town: This one is new and I don’t know how it’s going to be yet. It’s about miners on the moon. One if them is always bring in more material than the others. So a second miner decides to find out how he does it.

Carpe Chaos: Strange little strip about all sorts of alien races. Each race has its own mythology and cultural history. Inevitably there are conflicts. Beautifully drawn.

O Human Star: From the comic’s self-description: “Alastair Sterling was the inventor who sparked the robot revolution. And because of his sudden death, he didn’t see any of it. Until he wakes up 16 years later in an advanced robotic body that matches his old one exactly.” He looks up his old business partner and lover, thinking he did it, and finds out that there is mystery here.

Quantum Vibe: This is also straight SF. Several hundred years in the future the planets are colonized. There are L5s everywhere. Space transportation is easier than flying shuttle between Boston and New York. Nicole Oresme gets a job with scientist Seamus O’Murchadha and they have adventures across the solar system. It bears a strong resemblance to John Varley’s work but is in no way a rip off.

Space Mullet: Another one that’s a bit new. So we’ll see. Jonah is a washed up space marine who’s ended up with an alien partner Alphius. They do the odd jobs and then get hammered by the unexpected. We’ll see how it goes. Think of Firefly meets the Bob Hope/Bing Crosby on the road movies.

Space Trawler: Oh this lovely comic. This work is by Christopher Baldwin who did Bruno a while back. I had issues with Bruno but those issues are in the past and more than made up for with the deft touch he’s brought to Space Trawler. Essentially, a group of humans are shangied into serving the galactic community with hilarious and poignant results. Come to think of it, a cup of tea does sound good.