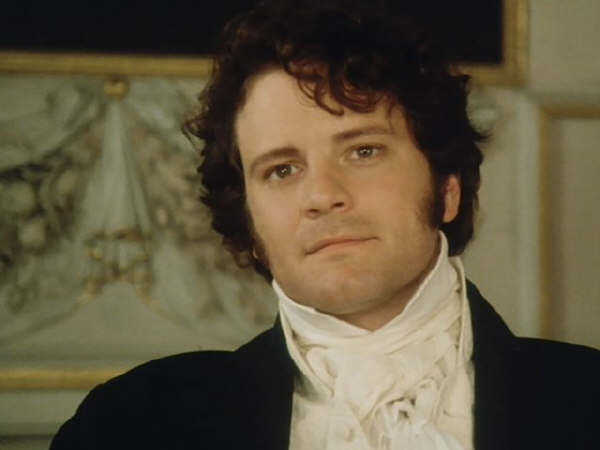 Ask most fans of Jane Austen who played the definitive Mr. Darcy and they’ll likely point to the guy on my left: Colin Firth.  For many people the 1995 BBC adaptation with Firth and Jennifer Ehle is the Pride and Prejudice, and I have to say they got a lot of things truly right (including Firth, but not, to my mind, Ehle, who seems to be smirking through the entire mini-series.  Your mileage may vary). And yes: Colin Firth is extremely decorative.  So much so that he was tagged to play Darcy in Bridget Jones’ Diary–a deliberate rather meta-reference to himself in the role in P&P. Yoicks. You are likely to hear less love for Matthew McFadyen, who played Darcy in the recent P&P with Keira Knightly, but I would like to speak in his defense.  I thought McFadyen conveyed Darcy’s vulnerability, and the haughtiness with which he tries to hide it, very nicely.  There are things about this version of P&P I disapprove of (including, it pains me to say, Dame Judi Dench as Lady Catherine de Bourgh, arriving in the middle of the night for no earthly reason except to require Mr. Bennet to greet her at the door in his nightshirt).  I have heard some dismay over the ending of the film, in which we see Lizzy and Darcy, probably on their wedding night–a scene which Miss Austen did not include in her book.  But neither did she include a scene where Darcy strips down to his shirt to go swimming on a hot day at Pemberley, a la Colin Firth, so I think we can forgive it.

But we can’t stop there in our search for Darcys.  There have been quite a number.  David Rintoul, for example, in another BBC production in 1980.  I am sorry to say I recognize none of the other actors listed along side Rintoul, but I am delighted to say that Mr. Bingley was played by a fellow who rejoices in the name Osmond Bullock.

Going even further back, we have Alan Badel in a 1958 BBC series (Pride and Prejudice appears to be a perennial favorite with the BBC). I like the look of Lizzy, played by Jane Downs, but Badel’s Darcy looks a little too supercilious for me.  Don’t go searching for the series, though.  According to IMDB, all six episodes are believed lost.  (Also according to IMDB, they used the same script for this version as for an earlier version in 1952, of which I have found absolutely no record.  That will have to be the Lost Darcy.

Finally, there was Sir Laurence Olivier, hopelessly mis-cast against Greer Garson, also hopelessly mis-cast.  Traditionally Pride and Prejudice is staged in the Regency–from the clothes, somewhere between 1805 and 1820.  But both Olivier and Garson felt that they didn’t look to advantage in Regency clothes, so the time period was changed to the late 1820s-early 1830s (a time for women’s dress I find particularly unattractive).  It’s a broad comic version, and one I don’t like much (can you tell?).

And there are the sort-of Darcys.  Orlando Seale in the 2003 version set in Utah.  Elliot Cowan in Lost in Austen. And perhaps most amusingly, Martin Henderson in Bride and Prejudice, the lovely 2004 Bollywood version.

There are a lot of Darcys out there–enough that you can probably find one to suit your own tastes.  I’m sure I’ve missed some, but if you know of any, do tell.