↓
Home Menu ↓
Skip to primary content
Skip to secondary content
Home→Genres→fantasy→Fantasy is the Language of the Night – On Ursula K. Le Guin 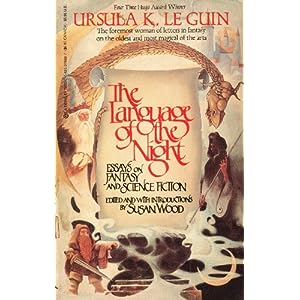 Most of us who are fascinated by the written word have mentors, whether we realize it or not.  There are people we admire greatly for who they are, and people we admire for what they have created.  In my case, I have told a few people of my admiration for their work.  Others I have kept clutched to my heart.  A friend found out once that meeting a favorite author or artist can seriously damage your entire view of their work.  So there are two or three people whom I have learned many important things from that I have yet to meet – have even ducked the chance to meet, shame on me.

One of those people is Ursula K. Le Guin.

To me, she is complete, a creation in and of herself.  I read her parents’ work without making the connection until much later.  I have devoured seminal works she created, and carefully set aside other Le Guin books I own but have yet to read.  You see, there are days when I desperately need a book by a “mentor”.  I’m currently planning a dive into a Joseph Campbell book I’ve never read.

There’s a Le Guin section on that bookshelf, too.

One of the first nonfiction collections I ever read was The Language of the Night edited by Susan Wood.  Wood collected many things Le Guin had written on various subjects – speeches, intros to novels (her own and others’), reviews and articles about subjects that interested her.  All previous nonfiction collections I’d read came out of the library, but I saw the title, pulled the trade paperback off the shelf, and read the table of contents.

“Why are Americans Afraid of Dragons?” Why, indeed? I thought, having wondered the same thing myself.  “Dreams Must Explain Themselves”.  I wished.  I still have ones I’ve written down, occasionally re-reading them in hopes that I have lived my way into answers of the questions posed.  “From Elfland to Poughkeepsie”.  I knew that some wonderful elves had come from Poughkeepsie – see Elfquest– but that probably was not what Le Guin was talking about.  And of course “Science Fiction and Mrs. Brown”.  I learned a lot from that article, as I remember, whatever Franz Rottensteiner may have thought of it.  The collection accompanied me home.

I learned something from each article.  I was reminded that there was a place for Mrs. Brown, an every woman, in fantasy and science fiction, although looking at some of the most popular fiction, you might think that the average man or woman had no place in either genre.  But then maybe you missed the Manly Wade Wellman novels about John the Balladeer (Wellman hated “Silver John” so we’ll use his own name for the character, though I do privately think of his hero as Silver John.)  Or Elizabeth Moon’s Remnant Population.  Now there’s a heroine as common as dirt – and just as fascinating, if you’ve ever really examined good garden loam.

I learned to listen to language – to read my own works aloud to myself, usually in the bathroom, since the acoustics are merciless.  If it sounded good, it generally was good.  If I heard a flat note, a slash went next to the line.  Retuning the instrument was required.  I learned to examine not the obvious question, but the subtle observation.  Should we be androgynous, our sex a mystery to all but our intimates?  Would we be better for it?  What if sometimes we are already androgynous?  If you realize that, how does it change your view of the landscape before you, the people scattered like raindrops against a pane of glass, streaking, running, melting into new forms, new creations….

I learned that power had many faces, and how easy it was to abuse it.  It was the most common thing in the world to carelessly misuse power.  Recognizing that mistake was uncommon – and struggling to correct it was rarer still.  I realized that in every culture, there were multiple histories, and not just the winners and the losers’ tales.  I learned that men and women had different histories and truths they passed along – and that children and parents were even further apart in their understanding of the world.  Le Guin understood Chesterton’s comment about children and dragons.  Children do not need fairy tales to tell them that dragons exist – they already know that.  Fairy tales tell children that dragons can be killed.

I learned that you can be too clever with plotting.  Sometimes all you have learned will avail you nothing – sometimes all you can do is ask questions, quietly and courteously.  And sometimes, when you do that, a great wizard demonstrates grace.  I learned that a story didn’t have much meaning without an interesting plot and characters.  I took no comfort from tales of depressed individuals who worked their way around into accepting that life had no meaning and you might as well face that. Vignettes about characters struggling with angst may be interesting – but they aren’t novels and they’re rarely stories.

I learned that I was a mapmaker, and my readers trusted me to lead them down into darkness and back again to the light.  They knew I’d walked the path first, and taken the best notes that I could.

A bookseller once told me that years ago Le Guin disavowed her early words in this collection.  Perhaps she did.  But at the time I first read them, they struck not simply a note but a bell, a chord swelling with confirmation of more than one observation.  Things can and do make sense – even the sad things, even the things we can never fix.

Ursula K. Le Guin continues to create.  She has written other nonfiction that was collected into books, and more novels than most of us can hope to finish.  At eighty plus years her tale continues, and now that I’ve found my courage, perhaps I’ll still get that chance to meet her.  In the meantime, I recommend her nonfiction – The Language of the Night and Dancing At the Edge of the World, for starters.  If you have never read her books?  Well… it would be a shame if you never read A Wizard of Earthsea or The Left Hand of Darkness.

Thank you, Ursula, for so many wonderful maps.  I’m doing my best to add a few of my own to the world.

Yes, Ursula K. Le Guin will take you down into darkness.  But she’ll lead you back again.