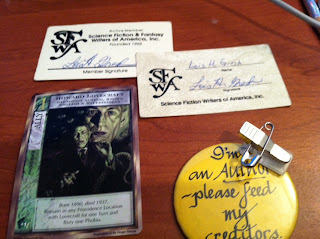 Every now and then, I dig through my Trivia Box (yes, I actually have one) and post photos of some of the writing-related items I’ve accumulated over the years.I have a bunch of SFWA membership cards ranging back to 1993, when I first qualified as a supposed professional.

Also in the photo is an H.P. Lovecraft card from the Mythos game. My son and I enjoyed countless hours playing Mythos, and along with the “Insane Mother” card, which my son particularly enjoyed — gee, I wonder why? — this card was a favorite.

I have to note here that we got almost all of our cards from Bob Weinberg. Apparently, Bob had many  cartons of Mythos cards in his “book business warehouse.” He told me that  the game wasn’t particularly popular, so he was stuck with a lot of cards and I was welcome to them.

In the 90s, writers were into buttons and often passed them out at conventions. Most of these buttons were along the lines of “I’m an Author, please feed my creditors” and “Writers deserve royalties.” I collected quite a few and tossed them all into the Trivia Box back home.

Other than “starving author” buttons, I also ended up with more interesting momentoes, such as “Cthulhu in ’96” and “House of Blues – French Quarter” from the World Fantasy Convention in New Orleans.Oh yes, and the rubber finger in the photo: Adam-Troy Castro gave this to me at a convention in the 90s.

Which brings me to the rubber teeth, shown below, that Leslie What sent to me as a gift. These are refrigerator magnets. I’ve had them since the mid-90s. I’m not sure why this photo includes an old penny. Perhaps I found it as a convention – ?  Yeah, probably. 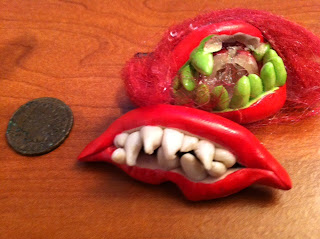