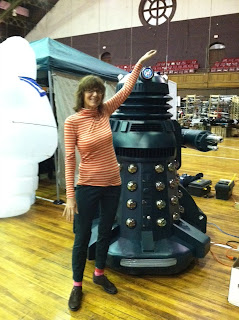 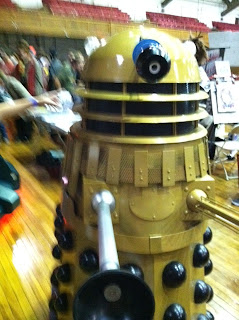 Roc-Con 2012 was even bigger and better than Roc-Con 2011. In the midst of the Fringe Festival, Rochester’s anime, horror, and science fiction fandom was out in full force Friday-Sunday at the Main Street Armory.Huge applause goes to the remarkable Alicia Lurye for another great  Roc-Con! Alicia’s a fireball of energy and good vibes.

Thanks to the Rochester Fantasy Fans (in particular, the fantastic Wayne Brown), two Daleks roamed the Armory all weekend, threatening to “Exterminate!” everyone in sight. I was almost Exterminated at least twice. (If I happened to be wearing an evening dress – not that I own such a garment – you might think I’m giving away a Dalek prize in the above left photo.)

As Guest of Honor Writer, I had a book table next to comic legend Steve Skeates (photo, below) again this year. I also enjoyed the company of my other tablemates Robert O’Reilly and Klingon makeup pro John Paladin. 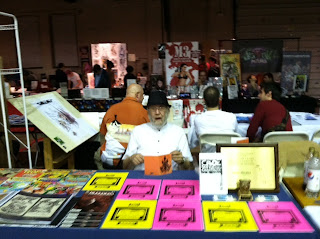 You probably remember Steve from last year’s Roc-Con report, where I gushed about Aquaman. For lots of great Skeates comic photos, make sure to check out on last year’s report.

This year, we had two Klingons at Roc-Con: J.G. Hertzler aka General Martok and Robert O’Reilly aka Chancellor Gowron. These guys are a laugh a minute. If they could speak more quickly, they’d be a laugh a second. On Sunday morning at the table next to mine, they burst out singing rowdy bar tunes. And of course, they performed in full Klingon costume on Saturday, much to the delight of fans, who flocked to their table for photos.

When not formally posing for photos, they COULD get dangerous, of course. I mean, they ARE Klingons, after all. (See below – Gowron and Martok attack me in a remote corner of the Armory when fans aren’t looking.) 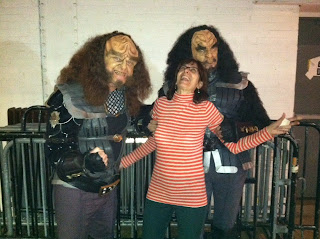 By Sunday, the Klingons had calmed down again. J.G. and Rob had them under control (see photo, below left).

I don’t know how they do that: unleash those rowdy beasts, then instantly, chain them back down. 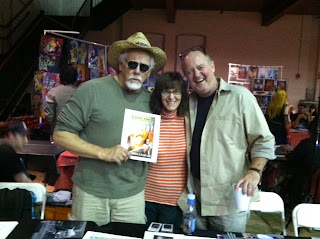 It was a lot of fun!

Also in the Star Trek actors’ row was Tim McCormack, who has extensive credits as Ensign Bennett in TNG. Somehow, every time I was wandering around taking photos, Tim was off signing autographs. So you’ll have to make do with his official TNG photo (below). 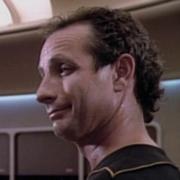 Vic Mignogna, incredibly famous anime voiceover actor – his credits are much too long to list here but include Full Metal Alchemist and DBZ – was a huge hit at this year’s Roc-Con. Also on hand were  Robert Kohr of Nickelodeon and Eric Stuart, another well-known voiceover actor whose credits include Pokemon and many others.

Below is wrestler pro and Borderhounds comic book hero, Brimstone. 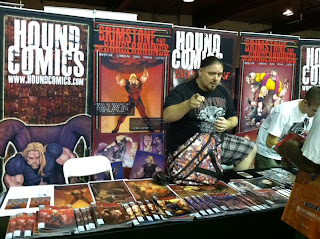 Below are Genozziere Productions’ Laurence Genovese and Lou Carrozziere. Check out some of their horror movie heads – wowzee, I like that red-headed guy! 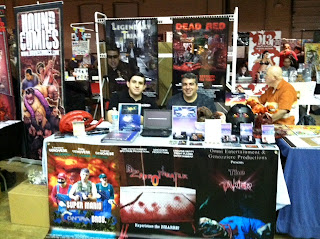 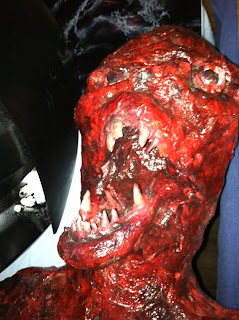 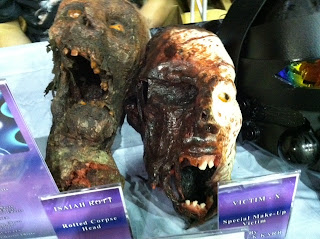 Roc-Con 2012 logo winner Andrew Blanda was at the table behind me. 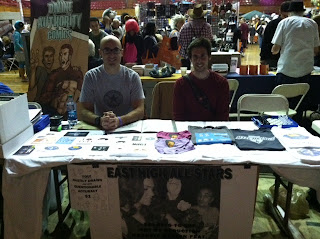 Here’s the lovely Marilyn Ghigliotti, who starred in the cult classic film, Clerks. And here she is with the Klingons, too, but they’re not attacking her! 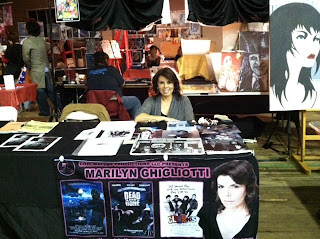 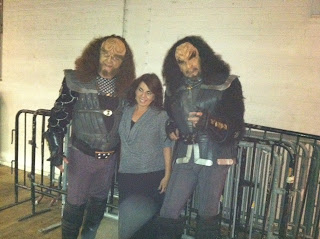 I shot this totally random photo from my book table: 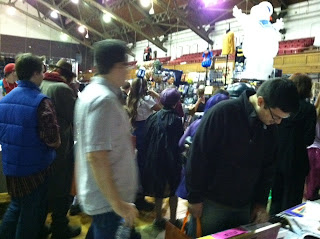 No con is complete without a journey into the subterranean basements, right? Some of you remember our adventures at Contradiction many years ago. So I checked out the Armory’s dungeon-like basement, where we had the “VIP” food room. 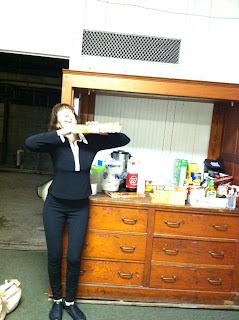 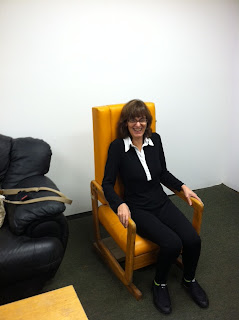 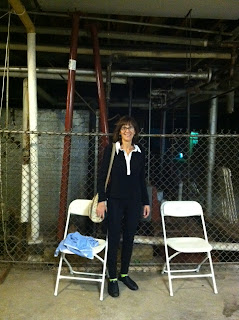 Over and out from The Dungeon, and until next time… 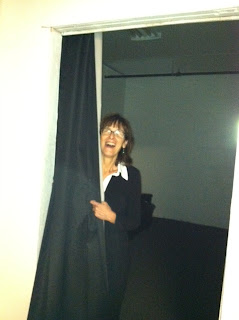