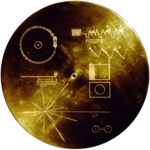 I was reading one of the blogs I follow and there was some curmugeonly complaining about the Curiosity and the Mars Science Laboratory. After all, haven’t we done a Mars rover?

This was a blog I liked and I was surprised to read this. After all, if this was coming from a bright, sophisticated individual. A Ph.D. If this was the thoughts from someone that bright, what might someone less sophisticated, less bright, think? We’re living in the greatest explosion of human knowledge in the complete history of man. We are exploring human capabilities that no one could have conceived of a hundred years ago. Curiosity encapsulates both of these. If it can’t capture the imagination of the bright and gifted what hope do we have?

This is what attracted me to both science and science fiction: the excitement of watching the unknown crystallizing into known.

Maybe we’ve become scared in the last few decades. Too paranoid and selfish to look up for more than a few seconds.

Both Voyagers were expected to have no more than a two year lifespan. Yet the engineers who worked on them didn’t plan for those two years. They put everything they had into it and that two years is, as of 2012, are thirty-five years and counting. The spacecraft are expected to finally die in 2025 and move away from earth silent and dark. But with a spark of hope attached in the golden record: a tiny relic of who we are that will undoubtedly outlive us.

If we were to build the Voyagers now would we have had the audacity and hope to make that record and attach it? Would we even think of it?

In the last few years of the space program we’ve seen great things: four Mars rovers, two Mars orbiters,  Cassini at Saturn, the New Horizons on its way to Pluto. We’ve touched asteroids and comets and brought bits of them home. We’ve found thousands of possible planet candidates and hundreds of actual planets. We have actually seen a planet orbiting another star and looked back in time towards the moment of creation. All of this is available on our cell phones.

I am reminded of the Kennedy Moon Speech:

There is no strife, no prejudice, no national conflict in outer space as yet. Its hazards are hostile to us all. Its conquest deserves the best of all mankind, and its opportunity for peaceful cooperation many never come again.

We are about to witness Voyager 1 entering interstellar space. Voyager 2 is not far behind.

I think it would be a terrible shame if they are the only such emissaries we ever send.