↓
Home Menu ↓
Skip to primary content
Skip to secondary content
Home→Genres→paranormal romance→Is This Story Too Big…Or Is The Book Too Small? 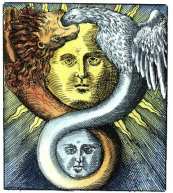 Recently, I read two novels that left me chewing over the issue of story size. The two novels were Love On The Run by Katharine Kerr and A Discovery of Witches by Deborah Harkness. Both were absorbing, with characters I cared about and nifty plot twists, ideas to chew on, and interesting locales. In other words, they were respectable novels by competent authors. I enjoyed them, yet each in a different way left me wishing the book had been either longer or shorter.

Love On The Run is the fourth in a series about a paranormal investigator, Nola O’Grady, her sweetheart Ari who is by no means mundane, the various doings of the super-secret agency that employs her, and her family, variously gifted and not always on the right side of the law on this and several other worlds. By the time Love On The Run takes place, we’ve had a chance to get to know these characters and worlds. The multiplicity of related alternate universes reminded me of some of my favorite early Andre Norton science fiction.

A Discovery of Witches is actually the first volume in a trilogy, but for some reason I did not realize that until I sat down to write this essay. I was thoroughly prepared to enjoy it — what a delight to begin a story in the research shelves of the Bodleian Library, tracking down and deciphering ancient manuscripts. I loved the opening chapters with Diana, a scholar of the history of science who has forsaken her heritage as a witch to pursue the life of the intellect. A manuscript with hidden writing that disappears once she turns it back in, mysterious supernatural creatures (witches, vampires, daemons) who gather in the library and start following her around, and a sexy, dangerous-mysterious vampire, all kept my interest. I especially enjoyed the scenes of sculling on the river and vampire yoga, amid the growing sense of a menacing magical world.

Somewhere the book lost me, however, and I’ve been puzzling over why. I think there were two aspects. One is a totally personal reaction, that what promised to be an epic in the sense of worlds-at-stake, of whole races with their own complex histories and conflicting goals, and a strong heroine who must dig deep within herself and transform not only her life but the relationship between the disparate races…got hijacked by a Romance. It felt as if this amazing character got dumped in the middle of Twilight-For-Conflicted-Witches, and the biggest question was when they were going to actually Do It.

In addition to this, the book ended in an unsatisfying way, with the chief creepy guy (the vampire Pope, by the way) never showing up for even a Climax-Light and the heroine decamping to another time period to hone her witchcraft. One could argue that this is all a set-up for the volumes to come (according to Amazon, it’s a trilogy), but even in a multi-book work, each book must have an arc of tension and resolution, even if it is partial resolution. The Lord of the Rings is most certainly one long narrative, but The Fellowship of the Ring, for all its open-endedness, leaves us with a sense of a ledge to rest on. It may be a very narrow, precarious ledge, with the fires of Mt. Doom erupting on all sides, but it is nevertheless a place in which the reader can catch his breath, and it comes after a climax-like sequence (and, just as importantly, a catharsis-like moment with the death of Boromir and the breaking of the Fellowship).

I managed to set aside my annoyance with A Discovery of Witches and look more deeply. What did this book promise? What was I eager to read more about? And what is the relationship between the more intimate and, let’s face it, smaller story of “can a witch and a vampire find True Love” and “Worlds At Stake”?

Some stories insist on taking place in vast, richly-detailed landscapes, but they are essentially domestic tales. We do not fall in love with Longbourn in the same way we long for Middle Earth. Others insist with equal fervor in spinning off backstory, minor characters with minds of their own, ideologies and deep cultural divides. No matter how the author tries to corral the story into a nice tidy shape, it keeps branching out like a fractal pattern. I suspect that I found A Discovery of Witches so unsatisfying was that it promised one thing and delivered another.

This brings me back to Love On The Run. The first book in this series, License To Ensorcell, fit reasonably well within the “urban fantasy” category. I say reasonably because Kerr is far too imaginative and thoughtful a writer to ignore the interwoven connections, implications, and nuances of even a “simple” story. As a result, each book elaborated established elements and introduced new ones, whether it was parallel worlds, dimension-traveling psychic squids, sentient were-leopards, Nola’s eating disorder, Ari’s childhood in a seriously warped New Age kibbutz, or why the Peacock Angel is a force of evil in one dimension but a power for good in another. The list goes on, spanning three more books, yet despite the burgeoning complexity, each book represents a complete episode. The overall reading experience, however, is one of something grand and multifaceted struggling to free itself from the straight-jacket of a narrow genre. It felt as if there simply was not enough space within the predictable urban fantasy niche for all these parallel worlds. One consequence is that when Kerr starts bringing together emotional and plot threads, the result kicks the story impact up exponentially. “Love On The Run” is the perfect title because the romance, although present and continuing to develop, has to take place in moments snatched while dealing with one escalating crisis after another. The series reminds me of an oft-quoted observation about Dr. Who’s Tardis: “It’s bigger on the inside.”

It seems to me that a story can be perfectly well written, enjoyable to read, and yet be the wrong size. Or perhaps, be jammed or stretched into the wrong mold. Or just not be at peace with itself and the focus of its true heart and energy.