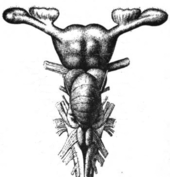 (Picture from here.) Last time we discussed the evolution of neurons. We are now deep in the world of metazoans.

The “most primitive” organisms of which we know all use neurons as part of a system. A nervous system allows stimulus/response complexity and adaptation by system organization. That means that to introduce new capacities to the organism can be done by reorganizing existing tissue types. You can reuse that hand for both holding a spoon and playing the piano; you don’t need to grow a new one.

There are two rough categories of nervous systems we’ve discovered on this planet. A Nerve Net System (NNS) where organization is regionalized rather than centralized and a Central Nervous System (CNS) where there neurons collect centrally. In the NNS data is received through an input system and the response is distributed through an output system. There is no central switch board but there are regional differences allowing alterations in behavior based on input stimulus.

Jellyfish, comb jellies, starfish, sea cucumbers are NNS animals. Humans, squids, crabs and planaria have something resembling a CNS. Note that an actual brain (as opposed to something called a central ganglion) is a further refinement of a CNS. Having a CNS does not require it.

NNSs can be fairly complex. Often NNSs connect up in something called a nerve ring– sea stars do this. They have a nerve net in each arm that connect to all of the other arms in a nerve ring. They hunt their prey. Box jellies also hunt prey and can perceive visual patterns. There’s some evidence for sleep patterns.

However, on this planet, the full range of nervous system complexity really only arose in those animals with central nervous systems. And, curiously enough, the most complex of those arose in vertebrates although the cephalopods give some vertebrates a run for their money. I’d stack up cuttlefish against lampreys for intelligence any day of the week.

The nerve ring approach seems to appear in those animals that are radially symmetrical (Radiata.) The animals that bilateral (Bilateria) tend more towards a central ganglion and a central nervous system. It’s not at all clear why this is so. There is now some evidence (See here.) that at least one group, the Ctenophores, show a bilateral plane in their gene expression during development. Another study (See here.) suggests that the radial symmetry is actually a derived form from animals that were originally bilaterally symmetrical. If that’s the case then it could be that the NNS/CNS division is an evolved response to a change in body plan: a radial body plan drives the creation of a radially oriented nervous system.

A 2003 paper by Alain Ghysen (See here.) uses that as a reason to neglect radial organisms entirely in describing the evolution of nervous systems. I’m not sure that’s as far as I would go since he leaps pretty much directly into brain evolution neglecting the organization of the Radiata. Personally, I think if you haven’t explained nerve nets in some way you haven’t really addressed the problem. Finding an excuse to throw them under the bus doesn’t really solve things.

(Ghysen’s paper is a lot of fun to read. It harkens back to the playfulness I used to read in the early papers of neurology, say in the late 19th and early 20th century. Here’s an example:

Regardless of that, Ghysen makes a strong case that the CNS of the different phyla such as crabs, molluscs and kittens have a common ancestor. The reference to dorsal and ventral nervous system organization in the quote above is key to this. Chordates (the phylum to which we belong) has their nerve cord on their up side (dorsal) and other invertebrates have their nerve cord on their down (ventral) side. Amphioxus is a tiny worm that shares the phylum with us vertebrates. The current thinking is that the chordate nerve cord is flipped upwards during development. In effect, we are all ventral nerve cord animals. Some of us just hide it.

This is supported by a paper in 2001 by Reichert and Simeone. By analyzing small rRNA sequences, they were able to redraw phylogenetic relationships between phyla and push back the origin of the central nervous system to the very first bilaterally symmetric animals. They further speculate that the original ur-bilateral animal might have had significantly complex brains and that subsequent simplifications of the brain (such as in clams) is just the complexity of the brain degenerating.

So, what’s a brain? What’s a central ganglion?

The ancient urbilaterian is thought to be a sort of segmented tube worm. The nerve cord proceeds through each segment from the anus towards the mouth. Each segment has a ganglion (a collection of neurons and neuron bodies) on the nerve cord and the ganglion in the “head” segment has a larger central ganglion.

Many call the central ganglion a “brain”. I don’t think that’s appropriate. There’s a significant difference between the computation potential of the central ganglion of a tube worm or planaria and the computation potential of a spider or a mink. It’s not one of merely quantity. Below a certain level of computability complex responses and perceptions aren’t possible. For example, the recognition system male spiders have to present to female spiders to make sure the males are not taken as prey requires a filtration and evaluation of incoming data that simply isn’t possible by a central ganglion.

Essentially, I call it a “brain” when it’s able to evaluate incoming random data against a standard model. A male fiddler crab waving that big claw in front of her is trying to get her to evaluate his action against her model of an acceptable mate. That’s a brain. A planaria evaluating different chemical concentrations to choose a direction in which to crawl is using a central ganglion. One has an abstract model to work against and the other is a difference engine. The fact that the model a mate in, say, a crab is a matter of fixed neurons and the model of a mate in, say, a human male is a matter of acquired video images of red heads, isn’t relevant. Both systems retain an abstract model of acceptable mate criteria against which the prospective mate is compared.

The evolutionary history of animals has a definite trend towards higher complexity from a central ganglion to simple brains to extremely sophisticated brains. The term for this is is cephalization. (See also here.) “Cephalum” is latin for head. Cephalization is the trend to move nervous system organization centrally– which, in earth animals, is usually oriented around the mouth which the origin of the head.

A side note: humans are extremely cephalized. Our brains have taken over many functions that in other animals are mediated by the spine. A good example of this is spinal walking which is well known in dogs. Parapalegic dogs often still have enough spine neural tissue remaining that if one leg is stimulated it will cause a walking reflex without any interaction with the brain. In humans the same stimulus rarely results in more than muscular spasms– which isn’t surprising. Walking erect requires a great deal of coordination between the balance system and the muscular system. The only common meeting point for those two systems is in the brain.

A Central Nervous System implies a division between the CNS and other less central neurons: the Peripheral Nervous System (PNS). The PNS serves up data and effects change. CNS tends to operate on data served up by the PNS.

Central processing of data has a couple of not-so-obvious advantages over decentralized processing. For one thing, having a central processor served by peripheral processors allows natural selection to operate on them separately. The PNS can proliferate sensors, interact with muscles, all of which can have different selective pressures. The CNS can then be driven by data incoming and outgoing to the PNS. (See here.) Humans are a good example of this. Our PNS isn’t all that different from our chimp relatives but what’s between the ears is significantly different.

One example of this is nervous system convergence. Convergence is the evolutionary development of similar structures from unrelated ancestors. The human eye and the octopus eye have similar construction. Yet the cephalapod eye and vertebrate eye evolved long after the two groups diverged. The reason they look similar is because the functional requirements for an eye aredictated by the physics of light and the biology of excitable cells. Any two organisms that need to see visible light and have similar cell physiology can produce a similar eye. They don’t have to– consider insects. But they can. (There’s a really good paper by Kiisa Nishikawa on nervous system convergence here.)

Once, about 500 million years ago, the CNS and PNS were in place evolution brought forward all manner of creeping, crawling, swimming and whining things.

At some point in vertebrate evolution the animals became experiential beings. By this, I mean that pain and pleasure were felt by an entity. Do ants feel such things? I suspect not. Do squids? Maybe. Do dog? You bet.

But if you unwind us and look back to where we came from all of the fundamental mechanisms of that original urbilateria are still there, influencing us every day.

The set of posts on biological revolutions was a lot of fun. But, as with anything, they have come to an end.

In retrospect they were woefully incomplete. For example, when I was thinking up this series I considered talking about the life’s invasion of the land. Naah. It’s just a new venue for life. It’s not really a revolution.

Then I thought about it. Really thought about it. There was a profound revolution when life invaded the land– or, rather, invaded the atmosphere. A whole series of mechanisms evolved to handle gaseous oxygen. In our current atmosphere, O2 is about 21%. Over time it has ranged up to 35%. In water, the solubility of O2 is a function of temperature. Near freezing it gets up to about 15%. This falls sharply as the temperature rises. By 72F or so it’s about 9%. By body temperature (37C) it’s closer to 7 %. All of the mechanisms to handle toxic O2 concentrations evolved when life invaded the air. Gaseous oxygen promotes aerobic metabolism and discourages anaerobic metabolism– this is why we have to limit oxygen in fermentation. Plants, fungi and animals all had to evolve new mechanisms.

And how could I have missed the evolution of embryonic development? That iscrucial to all modern multicellular organisms. A much bigger revolution than nervous systems.

Maybe I’ll revisit them again in the future.

But or this set of posts, so long and thanks for evolving all the fish.