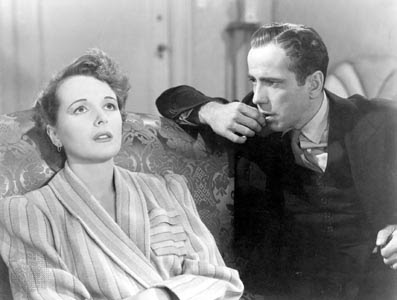 The estimable Sherwood Smith wrote, a few Sundays past, about Unresolved Sexual Tension.  This is a subject I’ve been mulling over as I write my fourth Sarah Tolerance novel.  Miss Tolerance, as some readers may know, is a Fallen Woman of Good Family in an alternate English Regency, who, rather than becoming a courtesan of some stripe, supports herself as an Agent of Inquiry.  In other words, she’s a woman with a job, and a very odd relationship with romance.

I wrote the first of these books with a very specific map in mind: The Maltese Falcon.  I knew, from the beginning, that Miss Tolerance would not end up happily ever after (if you’ve read The Maltese Falcon or seen the excellent Bogart/Astor film, you have an idea of how she ends up in Point of Honour–always remembering that her role is Sam Spade, not Bridgid O’Shaugnessy).  What I wanted to play with, as much as the role of women in early 19th century England, was the hard-boiled trope of a person of integrity in an honorless world, mapped onto a woman who has “lost her virtue.”  The first Sarah Tolerance book, Point of Honour, was written as a stand-alone novel.  When I wrote the second, and then the third in the series, I found myself faced with one of those weird writerly questions: can my heroine have a happy ending?

At the end of Point of Honour, when Miss Tolerance has made a decision which has wrecked her romantic landscape, she is left with a few new friends, including the magistrate, Sir Walter Mandif.  He’s a deliberately unlikely romantic figure–more Peter Wimsey than Edward Rochester. Miss Tolerance and Sir Walter go to the theatre.  They talk over their work (they both work in law enforcement, such as it was in 1810). They exchange stories about the people they encounter (as near as I have been able to tell, the magistrates’ offices at Bow Street were like an everyday circus: chaotic, earthy, full of The Weird).  And Sir Walter begins to develop feelings, as they say, for Miss Tolerance.  Which she begins to reciprocate.

If this were a one-off book, I’d decide at this point whether to let them go off into the sunset together or not, and make it so.  But it’s a series, and very much a series about the choices Miss Tolerance makes.  Given the time, the place, the setup, and her slowly dawning realization that her job isn’t just a way to keep food on her table, but an undertaking she enjoys and finds deep satisfaction in, I’m not sure she would choose to marry.

I’m thinking about a couple of issues here. In 1810, marriage is pretty much the only way to redeem her “dishonor” and pick her up from her “fall”. But if SarahTolerance regards herself as damaged goods (and she does) would she offer herself as a marriage partner to a man she loves well enough to marry?  Wouldn’t she fear that a marriage that “redeems” her might as easily discredit her new husband? This sounds melodramatic, even for 1810, but the very honor that makes Miss Tolerance a character I enjoy writing makes it hard for her to compromise her personal principles.  If she loves a man, how can she bring him dishonor?  Even if the man in question regards it as a non-issue?

You can see why these questions make my head hurt.  Beside issues of love and self-interest, there are other reasons she might not want to marry Sir Walter, starting with conflict of interest: she often has to mix with people of the criminal classes, who might shun her if she’s married to The Law.  Sir Walter might come under fire for marrying a woman with connections to the underworld, and she’d feel rotten about that.  I suspect that Miss Tolerance also harbors some very old-fashioned notions of what marriage is, or should be (she’s a gentlewoman, with the expectations of her class and time).  Poor women worked, but if you were a gentlewoman the expectation was that you ran the household, a job in and of itself but not a career.  She believes that marriage would require her to give up the work she’s doing; not to do so would be to make her husband suffer for her career.  I–through Sir Walter–can summon up a budget of quite reasonable rebuttals to this, but the fact is, Miss Tolerance has to be willing to let him make sacrifices to be with her, and she is not.  Not yet, anyway.

I really love Sarah.  She’s prickly and honorable and humorous and hell with a sword.  I’d like her to be happy, but all her reasons not to be involved with a man (and particularly with Sir Walter) make a kind of sense for her.  So I find myself deep in Unresolved Sexual Tension land, trying to figure out if I can A) find a way to let her be happy, and B) not let romantic happiness change who she is.

I am one of those writers who writes by discovery: I start out with a sense of where I want to end up, and keep following my characters down dark alleys until we get there.  So I’m really not sure where Miss Tolerance will wind up.  Happiness is sometimes the enemy of dramatic tension–but sometimes not.  I keep re-reading Dorothy Sayers’ Busman’s Honeymoon, in which she not only marries off her protagonist, but manages to make that happily ever after only the beginning of the adventure.  It’s possible–if you’re as good as Sayers was–to do that.  I guess I am waiting, along with the people who have been kind enough to take Sarah Tolerance to their hearts, to see what happens.

Madeleine Robins is the author of  The Stone War, Point of Honour, Petty Treason, and The Sleeping Partner (the third Sarah Tolerance mystery, just out from Plus One Press).  She is also the author of a double-handful of short fiction, most available on her bookshelf. Her first Regency romances, Althea, My Dear Jenny, and The Heiress Companion, and Lady John are now available from Book View Café.  She has just completed The Salernitan Women, an historical novel set in medieval Italy, and scheduled for release in winter 2013.