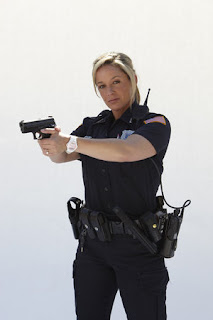 Perhaps the first thing we’re taught as fiction writers is that passive voice is the literary equivalent of a clogged artery.  “Use active voice,” we’re told.

What exactly does that mean?

“Chelsea dove for cover. The sound of guns going off could be heard over the trampling feet of the terrified crowd. There was a smell of gun smoke in the air and blood was flying everywhere. Trying to get away, people screamed and ran, getting between her and the terrorists.”

Could you clearly picture the action? Did you realize that this passage describes a group of armed terrorists staging an attack on a crowded shopping mall? The protagonist, a police detective, is caught up in the chaos. The reader can be forgiven for not “getting it.” The setting is unclear. The “terrified crowd” could be anywhere.

Also, though the writer wanted to depict pandemonium, any excitement or sense of urgency is leeched out of the passage by the use of passive voice, inert verbs, and compound sentences. It’s not even explicit that Chelsea is the one who hears the guns or sees the blood flying everywhere.

Where’s the passivity? It’s in such phrases as “could be heard”, “there was a smell”, “blood was flying”, and the multiple clauses in the last sentence of the passage that buries the observer of all this mayhem (Chelsea) in the crowd.

“Blood. Noise. Confusion. The acrid reek of cordite overwhelmed the holiday mall aroma of caramel corn and perfume. Chelsea dove for cover behind a fountain. She knew the rhythm of the weaponry; her service revolver would be all but useless against the terrorist’s submachine guns.”

What the edited passage does, besides impart more urgency to the scene, is give us more information about Chelsea and her environment. We know what time of year it is and we know that Chelsea isn’t just a holiday shopper, but a seriously outgunned policewoman or perhaps an FBI agent. The short, staccato sentences that lead off pick up the pace. In three words, the reader can catch the chaos.

The rewritten paragraph also engages the senses, calling on sight, hearing, and smell to set the scene. Best of all, it does it with an economy of words.

The soul of active voice is brevity. Not necessarily short sentences, but a short distance between the subject of the sentence and the action—the noun and the verb.  I think these two sentences should clarify:

See and hear the difference? The first sentence tells us Chelsea is the actor, but we can’t see her act until the verb “dove” tells us what she did. In action sequences, the quickest route between two points is a strong one-two, noun-verb punch.