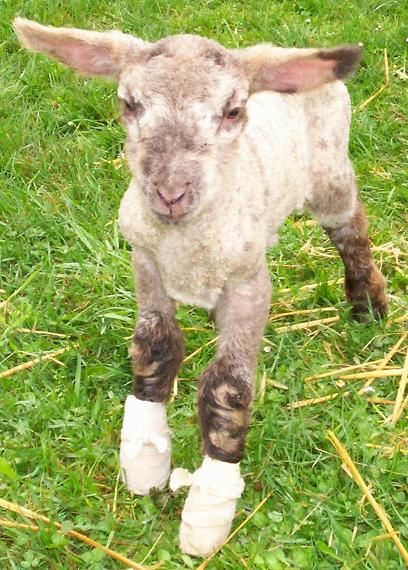 With Europe shivering in the coldest spell for decades – yesterday we woke up to -12°C and never got above -6°C – I thought I’d post a little bit of Spring sunshine.

And what could be springier than lambs?

But first an explanation as to why that poor lamb is wearing bandages. He was the last of three triplets produced by one of our ewes in April 2009. He was smaller than the others and later that morning we noticed he was having difficulty walking.  Both his  front legs were knuckling over so he was walking on his wrists. This happens from time to time – no one’s completely sure of the reason but if you splint the legs the muscles can often strengthen and the lamb can be back gambolling splint-free in a week or so. The only problem is finding a splint.

The best are those wooden sticks you find in ice creams/ ice lollies, but we didn’t have any in the house so…

We had to drive into town and buy a pack of Magnum chocolate covered ice creams and – for medical purposes only – consume two as quickly as possible. The things shepherds have to do for their flock:) Then it was a matter of catching Limpy and binding the splints in place with a bandage.

He made a full recovery and was bouncing off all four feet with his siblings within a month. Yay!

And here’s a remarkable lamb cross rabbit (labbit?) Note the rabbit ears and how, a few months later – second from the right below – he exhibits a remarkable similarity to Gus Honeybun – a TV rabbit from the 60s and 70s.