I had planned to have a single blog entry on abiogenesis. But, it’s too big a subject. So, I’m just going to start here and we’ll see how it goes.

Abiogenesis is the process of living systems arising from a non-living environment. We know it happened at least once—since we are, in fact, here. Since there are no fossils of life prior to life, we have to speculate. Luckily, speculation is fun.

At its heart, abiogenesis is process by which complex chemistry that does not involve living systems generates the complex chemistry that does involve living systems. We are chemical systems. The same physical laws that apply to non-living chemistry applies to the chemical reactions that occur inside of us. Glycine derived from lightning striking an oil slick is the same glycine produced by a tomato. The chemical processes in the two cases are different but the end product is the same.

We begin with the nature of the pre-biotic earth. Water. A bunch of organic molecules. Enormous amounts of energy but not too much. There are a lot of volcanoes but the earth is no longer molten. A lot of sulfur, carbon monoxide and cyanide. Things that would kill us quickly and painfully were we to suddenly show up in our time machine.

And most importantly: no oxygen.

Oxygen is great for living systems already here. But it’s absolute poison to any of the self-organizing chemical reactions that might have led to living systems. Free oxygen is a product of living systems. We’ll be talking about that in the entry on the prokaryotic revolution.

Our pre-biotic world is hot, dismal and poisonous.

So: given what we know about chemical processes and the pre-biotic earth, how did we get here?

What is here anyway?

We know what living systems are in that we can point to living systems all around us. While there are a lot of definitions of life floating around, I’d suggest that to get to our sort of living system takes a few pre-requisites:

Once you have the package all together natural selection can drive refinement towards an efficient system.

In my opinion, it all starts with containment so that’s where we’ll begin.

Containment doesn’t need a cell. It doesn’t even need a physical barrier. The problem with most of the chemical reactions used by living systems is that without some mechanism to constrain the possibilities the reactions drive away from the goals of living systems rather than towards them. Combinations of nucleic acids tend to hydrolyze as do peptides. These reactions have to occur in an environment where the path is, for example, from nucleic acids to the polymerized RNA or from amino acids towards proteins.

There are a number of interesting speculations on how containment occurred. 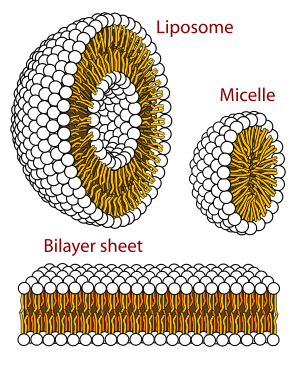 Living systems use cells. The three great domains of living systems solve the problem of building cells in two different ways. All use phospholipids, long chains of carbon that have a phosphate group at one end, but use them differently.

In bacteria and eucaryotes cells are enclosed in a phospholipid bilayer. The phosphate group is hydrophilic—it binds easily with water. The long carbon chain is hydrophobic and likes to bind with molecules that are not water such as fats, oils or other long carbon chains. Think of a drop of oil on water. The two keep to themselves.

Instead of two layers, Archae have a single layer membrane that have phospholipids at both end. Again, it serves the same hydrophilic-hydrophobic-hydrophilic construction but with a single molecule instead of two.

It turns out that phospholipids will spontaneously form membrane enclosed microspheres called micelles. Phospholipids can be abiotically created given the right starting materials and heat. (See here.)

We need to get pre-biotic systems to this sort of cell structure but containment doesn’t require them. Anything that enables to sequestration of chemical reactions will serve. For example, Sidney Fox took amino acids in solution and let them dry out—like the drying out of a pool. Surprisingly, the amino acids self-organized into long thread-like molecules now called “proteinoids“—essentially, polymerized amino acids. He also found that under the right conditions, these proteinoids would also organize into microspheres: contained bubbles. The bubbles could swell and deflate and even replicate.

Fox found these microspheres in Hawaiian volcanoes. It started another area of speculation involving pumice rafts. Pumice has many pores and tiny chambers. These pores could be partially sealed to provide the environment for early chemical reactions that led to life.

These sound a lot like nanobes or nanobacteria. Both are very small, appear to have reproductive capabilities and are not likely to actually be living systems. They are, however, candidates for protobionts: chemical systems that predate life.

We can, then, have containment with cell structures without actually being cells. This gives us the opportunity for contained chemical reactions without cell membranes. Given, again, that we can get cell membranes spontaneously from phospholipids, what do we put in them?

That’s for next time.