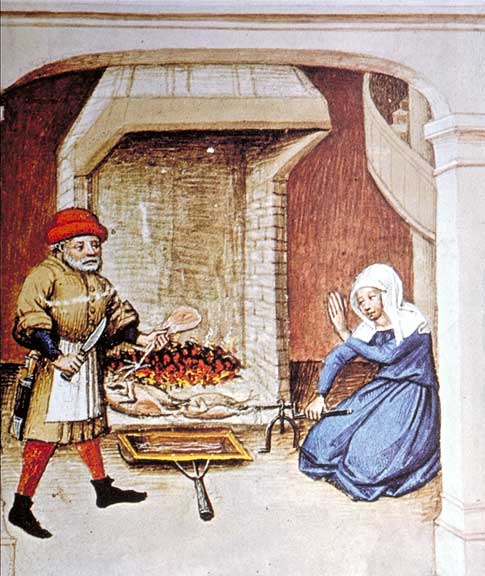 Food is an integral part of world-building, whether it plays a direct role in the plot or not. Its availability and quality affect every human endeavor, and scarcity – or fear of scarcity – is a powerful motivation for conflict. What we eat (and what we don’t eat), when and with whom, all these tell a story “off the page” about ourselves and our culture. So it’s important to depict both food and its setting in a way that deepens the world we are creating.

I live in a small town, and on our 1/3 acre plot, my husband and I grow a significant portion of our produce, which I then harvest, preserve, and cook. Even without the digging and planting, weeding and pruning, this  is hard work. It also takes planning, not to mention a knowledge of climate and soil, compost/fertilizer management, pest/predator control, and techniques for “putting food by.” I notice when food is taken for granted in fiction, just the way an experienced  equestrian will notice when horses are treated like motorcycles.

Throughout most of human history, food has been a limited and therefore precious commodity. The availability of nutritious foods that can be stored has shaped the course of civilization. Far too many writers seem to be taking their own experience of food (it’s what you buy in a can or a frozen package at the supermarket) and extrapolate that into their fantasy worlds. Then it’s all too easy to bounce the reader out of the story.

Projecting modern technological methods of food production, preservation, transportation, and preparation into a lower-technology fantasy world runs the risk of booting a knowledgeable reader out of the story. (Come to think of it, the same holds true for a higher technology world as well.) For example, to stew means to simmer for a long time over low heat, and is an excellent way of preparing tough cuts of meat, but it takes hours, and that means plenty of fuel and a cooking vessel of a material like metal – which is heavy — that can withstand long cooking times. I’m sorry, Peter Jackson, but Eowyn could not have served Aragorn a stew while on the road to Helm’s Deep. She might have heated water and cobbled together some rather unappetizing dumplings, but that’s not a stew.

More significantly, food presents an excellent vehicle for world-building. Each aspect of its production and handling conveys a tremendous amount of information about the society, ecosystem, and cultural attitudes. So if all your characters breakfast on bread and cheese, and every inn serves stew, you’re missing a great opportunity to make your world and characters more interesting.

A few thoughts on agriculture: Food has to come from somewhere, and unless you have a magical system that transports

it from another dimension or creates it out of thin air, someone has to grow or gather it. We can challenge the “primitive-society” stereotypes of men-as-mighty-hunters and women-as-lowly-gatherers by looking at the limitations of game and the central importance of food that is gathered or grown in small gardens. The difficulty for us as writers is, I suspect, that gathering/gardening requires so many hours every day. It’s hard to go off and have adventures when most of your time is spent on feeding your family. Adventures generally rely on the ability to “leave home” with the disposable time to do other things besides obtain and prepare food. Besides, hunting is so much more heroic; all kinds of dramatic things can happen.

The shift from hunting-gathering – where everyone participated in the activities of food production – to agriculture fueled the development of cities. Grain could then be transported and stored for long periods of time, although this is an engraved invitation for rodents (and the diseases they carry) to come  have a snack. A wheat-based diet (“daily bread”), like any other diet dependent on one type of food, means a vulnerable food supply. Drought, flooding, or crop disease then easily results in famine, such as the Irish potato famine in the mid-19th Century.

We develop attitudes about what foods are “better,” which are forbidden, and which are essential to life or status. One of the most powerful ways of maintaining cultural identity is by the exclusion (or necessity) of certain foods (abstaining from pork in Islam and Judaism). Other aspects of the specialness of certain foods include holiday or celebratory foods, and which foods are suitable for which groups of people (different diets for babies, for example, or pregnant women). Food can be used to elevate individuals or demean them; likewise, different culture may vary widely in how they view the production, preparation, and serving of food. Some foods may be taboo to handle by everyone, or only by certain people.

For me, the creation and depiction of regional cuisines is one of the delights of world-building. People in India, Africa, Finland, and Venezuela don’t eat the same foods, so why should all the food in a fantasy world be the same? Different cooking styles and condiments, spices and garnishes, not to mention basic materials (wheat-based vs rice vs corn vs yams vs manioc vs whale blubber…) can result in a tapestry of sensory detail. And not a few jokes or even insults as well.

Armed with a few questions, we can look at the many roles food plays in world-building. Much of this background will be off-stage (unless your protagonist is a chef), but the decisions you make about food will color every aspect of the lives of your characters.

Who produces the food, and how are they regarded by other portions of their society? Despised, ignored, exploited,

revered? Do they use magic in the sowing, reeping, weeding(!), hunting, slaughtering, harvesting, preserving…? Do they have special powers arising from their intimate relationship with the natural world, the animals they hunt, the plants they nurture? What are the traditions of sharing, communal living, and hospitality, and are they the same for other occupational groups? What happens to surplus?

What is the balance of locally grown versus imported foods? What is the seasonal or weather cycle and how does it affect food production? Are all the nutrients necessary for life present in the local diet? And are they available all year round, or are there season in which only preserved food is available? Or does the local diet provide subsistence only and robust health depends on traded/imported foods? What is the major source of calories in the diet (think outside the “grain box” to starchy vegetables, tree nuts, seeds, oily foods…)

What’s involved in moving food from the producers to consumers who then exchange money or other goods for what they cannot grow? How is perishable food handled? How are the merchants and carriers regarded? What are the penalties for theft (is it considered a grave crime like murder to steal food?) What is the response to hungry people and is it different for children versus active adults versus the elderly?

How do various characters react to strange foods? What is the role or significance of poisoned food in this culture? What about psychotropic edibles? What are the intoxicants in this society and do all groups participate in them or are some reserved only for special classes? What qualities are attributed to certain foods (courage from eating a lion’s heart, cunning from snake meat)?

Are certain foods appropriate for only certain occasions (think holiday foods, funeral foods, foods given only to sick people or warriors about to go into battle)?

Who prepares the food and are they also the ones who purchase it? What are the customs of the marketplace? Is carrying food a mark of privilege, an advertisement of culinary skill, or a badge of servitude? Is a cook a priest, a skilled professional, a menial, the head of a household, or an object such as “spoils of war”? What are the superstitions surrounding the preparation of food? How is spoilage managed and when is food considered inedible? Who eats food that has gone bad? What are the attitudes towards food-borne illness and who or what gets either the blame or the credit?