↓
Home Menu ↓
Skip to primary content
Skip to secondary content
Home→Books and Reading→Consideration of Works Past: The Green Rain 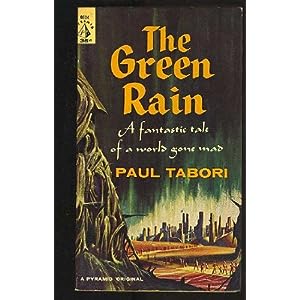 Usually, I talk about science every two weeks. But the turkey tryptophan is still coursing through my veins and I can’t face it. So I’ll wax literary for a bit.

Over the past few years I’ve been re-reading works that I found interesting and provocative back when I was a mere babe. (You can read previous ruminations here, here, here and here.)

The Green Rain was published by Paul Tabori back in 1961. It’s a short book– barely 70,000 words, if that. It’s premise is simple: there’s a mistake with a chemical missile and something goes wrong. The chemical seeds the clouds. It rains and the result is that everyone caught in the rain turns green. General hilarity ensues.

Well, only if you count political destruction, death and riot as hilarity. Perhaps I have a skewed sense of humor.

There were a lot of odd books written in the sixties and seventies, many of them better known. The Muller-Fokker Effect by John Sladek, for example. Adam M-1 by William C Anderson. Rally Round the Flag, Boys! by Max Shulman. Most of these works were fairly light even though they might be handling fairly dark material.

The Green Rain reads like a bitter, eloquent Ron Goulart at the height of his powers. It opens with a quote from one of the characters, a bitter old professor named Pelargus, who says “Something goes wrong. It always does.” Then, it wanders over to a satyric biochemist who has created “chlorophylogen”, a chemical precursor to chlorophyll. It has the property of generating plant like behavior upon contact with light. NASA (the ISS in the book) decides to send a rocket to the moon to make it earth like. It fails in launch and returns to earth, seeding the rain with chlorophylogen. Something happens to the chemical in the return. It’s no longer simple chlorophylogen, it turns human beings green.

It’s a romp. Or, at least it is in the beginning.

Things go dark about half way through. It’s not like Shulman or Anderson. There’s no easy, happy ending. The bitter Pelargus may have the last laugh after all.

This is what fascinated me when I first read it long ago and it fascinates me still. Though the science is dated and the political world is different, there’s a lot that still rings true in this book. There’s a scene where a young actress discovers herself pure green and comes out screaming and then faints. When she wakes up her first words are “I’m going to sue for a million bucks!”

And we’re off and running.

What’s curious about this book, and some of the others mentioned, is how thoroughly vanished they are in popular culture. Certainly you can find them. All of the above books are mentioned in wikipedia and you can get used copies at Amazon. The internet never forgets anything.

The impact at the time of Sulman and Anderson was considerable. Tabori, less so, but he was well known. Almost none of these names are mentioned now.

It’s what I call the Bret Harte phenomenon. If you’ve taken an American lit course, you’ve ran across the name. He was a contemporary of Mark Twain. However, now we remember Mark Twain and Harte is barely remembered. Now, I’m not saying Harte was as good a writer as Twain– he was not. But he was worth reading and popular for a time. You can make a similar statement about William Saroyan or my own favorite author, John Dos Passos. Both brilliant writers and rarely read these days out of literature courses.

The Green Rain is a lovely little science fiction book that will make you think. Don’t take my word for it. Go over to Amazon here and buy it. Read it.

We’ll bring these guys back eventually.