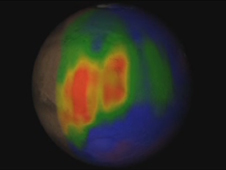 I apologize for this post being late. There were… technical challenges that had to be overcome.

Throw your mind back to any Star Trek or similar movie or television. The ship approaches a new planet. The captain says to whatever passes for a science officer: “What’s down there?”

The SO replies: “Life signs, Captain.”

Just what does that mean? What are signs of life?

Can we in fact recognize it when we see it?

Martin Hanczyc has a TED talk here that talks about the line between live and non-life. He makes any good points including that living systems have to have containment and metabolism.

(Hanczyc rightly points out that living systems are hard to define and brings up the bugaboo about viruses not fulfilling the definition of life. My own feeling about viruses is that they are elaborate biochemical systems that parasitize living systems. I don’t think they can be called alive. What they can prove is that natural selection can occur with biochemical systems that have independence from the underlying living systems. But that’s another discussion. I think for our gross purposes we can neglect them.)

The National Research Council tried to derive some idea about how life can be identified that bears no relationship to our own. They came up with the following criteria: (This is all in the TED talk, BTW.)

These are extremely general qualities and one could easily see a designed system meeting them. I would personally add in the susceptibility to natural selection but that may be quibbling.

Where he gets interesting is that he’s turning the process backwards and starting with question three: Is matter ‘evolvable’? By this he means can chemical systems be induced to present the opportunity for natural selection.

Cronin believes that the physics of life is encoded into the rules of the universe in the same way as the physics of stars. He refers to life as a “flame in a bottle.”

Cronin starts with the idea of contained chemical systems. He’s been repeating Miller-Urey’s experiment with multiple interconnected compartments with some interesting results. Now, though, he’s been attempting to make synthetic biological systems without carbon. (See here and here. Paper here.)

He calls these “cells” iCHELLS: inorganic chemical cells. iCHELLS have membranes to contain chemical reactions. They have chemical processes and the ability to store electricity. He’s interested in creating evolvable matter– which, to his mind and my own, is the essential definition of life. In place of carbin he is using polyoxometalates. These are molecules made up of multiple metal atoms bound together by oxygen.

These compounds can form complex structures. Cronin points out that competition between molecules is also possible. If you have two compounds that can polymerize or otherwise form complex structures and those two compounds require the same root materials to do their magic, they are, in effect, competing for those resources against one another. The more efficient compound under the current conditions will “win.” Changing the current conditions, such as changing temperature or pressure, can modify the selective advantage of one molecule over another.

This isn’t life. But it does suggest that natural selection for biological systems may be a intrinsic reflection of the chemical selection between molecular systems. Cronin believes he may have “life” in two years. I think he’s dreaming but we will see.

An interesting side effect of his work may be the creation of microscopic engineered complex systems. These won’t be nanomachines but may be something I suspect will be more useful: micromachines: machines that operate in cell size domain.

So, if we subtract carbon from the equation, what’s left? How do we detect life?

Adami is a professor at the Keck Institute of Applied Life Sciences. He’s interested in simulating evolutionary biology with digital organisms. From this sprang Avida, a system that allows artificial organisms to compete with one another for resources. The organisms can change over time, allowing selection to occur and allowing the organisms to evolve.

Adami was approached by NASA to help them determine how to look for life. He boiled down the concept of life to ideas that were completely divorced from chemistry.

The TED talk is great. Please go watch it. In a nut shell, he had his little software organisms evolve and “metabolize” and then looked at the resulting environment outside of the organism.

Think about earth 4.6 billion years ago. It had a primordial soup containing concentrations of various chemicals. However, once life began the life forms exploited those chemicals, translating them to other chemicals. In a fairly short time the chemistry of planet earth changed.

Similarly, the resource environment of the artificial organisms could also be expected to change once life began.

Now, being an ex-biologist, I think he was looking at the effect of the inverse operation from mutation. He was dialing up or down the persistence of traits. Once that persistence reached a threshold level, life spontaneously occurred. This is an underlying concept in Cronin’s work, too. Once the conditions are right chemicals become available to natural selection and once that happens they are alive.

The signature of life, then, is a recognition of a resource pattern that is not attainable without a living system, be it artificial, organic or made up of metal salts.

From the point of view of detecting life on other planets, this is both encouraging and disheartening. It’s encouraging because it is an unequivocal sign of life: physical resource observations that can’t occur without living intervention.

But it’s disheartening, too. We could, for example, look at earth from some distance and figure out that it’s not in equilibrium. The chemical signature of earth couldn’t happen without living systems. However, that’s not because there’s anything special about earth. It’s because we have enormous understanding and data about how earth works. We have vastly less knowledge about planets in our own solar system and almost no knowledge at all about exoplanets. Heck, we’re seeing planets right now that we thought couldn’t happen. How could we possibly look for an abnormal resource signature without knowing what a normal resource signature is?

For example, there’s the problem of methane on Mars. Methane in the Martian atmosphere can only last about a year. Yet we see significant amounts of it. That means that something on Mars is making methane. On earth, we’d say that was the signature of a living system. That’s where methane comes from here. But on Mars? We don’t have a clue.

But life may be an inevitable quality of matter under the right conditions. Cronin said it as a hypothesis: is matter in and of itself evolvable?