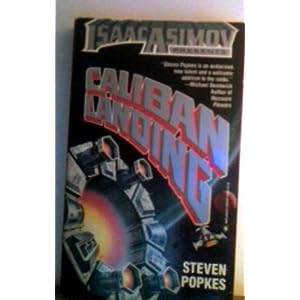 About mumbly-seven, Congdon and Weed published my first novel, Caliban Landing. It’s still for sale as a used book and I’d like to bring it out as an e-book. Just as soon as I get up the nerve to cut up and scan the hard cover. Until then, you can get a copy here. Go ahead. I can wait.

I’ve been talking a lot about how science, evolution and fiction go together. So I’m going to talk about specifics by using Caliban as an example. Heck, maybe it will generate enough interest that somebody might want to read a mumbly years old book.

Caliban had a lot of science fiction elements in it: faster than light travel, several alien species, human/AI interconnection, cyborgs– all sorts of things. I’m going to limit my discussion to the biology in the book.

Caliban was a first contact novel. Humans come to the planet Caliban to survey it for human exploitation and maybe stake a claim or two. The planet has ostensibly been cleared of sentient habitation. This turns out to be incorrect and the team accidentally kills one of the sentients. The legal situation being what it is, they decide to try and make first contact and in effect get absolution and stay out of a higher, and less forgiving, court. Things don’t go as planned.

Given this was a first contact novel, what drove the book was the nature of the aliens. Since I was a biologist, the aliens had to be biologically derived. What drove the aliens were the plants.

Photosynthesis on earth uses only a small portion of the available spectrum of light. This derives from the heritage and limitations of chlorophyll, the primary pigment used to capture the energy of photons. Chlorophyll a has its absorption peaks in magenta and orange. Chlorophyll b has its absorption peaks more in the blue and yellow. The lighter blues and greens and the UV and IR regions are essentially areas of no absorption. One would expect that chlorophyll must be very efficient and conserved to remain so common across essentially all photosynthetic organisms.

Hm. I thought. Chlorophyll only responds in a fairly narrow set of ranges. Opsins, the pigment in the eye, have multiple absorption spectra. In humans, blue cones peak at 437 nm (blue), rods (night vision) peak about 498 nm (sort of blue to green), green cones 533 nm (green), red cones 564 nm (yellow). Rhodopsin, a common opsin in rods, is somewhat broader in absorption than the color opsins. In addition, there are variations in rhodopsins that have differing peaks. (A good description of how seeing works is here.) Rhodopsin is quite sensitive to light but fragile. It’s why we have good night vision but also why that night vision can be easily destroyed. (See here.)

What if (an SF writer’s favorite phrase) we had a pigment (or pigment system) that was tuneable. That is, its peak absorption spectra could be changed according to available light spectra. Possibly, it wouldn’t be as efficient as chlorophyll but it might be adaptable to multiple conditions. An interesting side effect is how it would look to us. The close uniformity of green in the plant world is an effect of the narrow ranges of the pigments involved. There’s variation in the other pigments but chlorophyll is pretty constant. A tuneable pigment would have different reflective properties depending on how it was tuned. The top of a forest canopy would be a different color than the interior. Shaded plants of the same species would change depending on light level. And most plants would change considerably with the seasons.

I took the idea and filed it away.

Later, I was reading an article on the biochemistry of photosynthesis. After all, the photon must be absorbed before its energy can be captured. That’s got to be pretty interesting.

Photosynthesis is dependent on fluorescence. (See here and here.) Fluorescence is the process by which something that has absorbed energy by either light or other electromagnetic radiation emits it. Commonly, a photon strikes an electron of a substance and imparts energy. The electron emits a photon as the energy is released. Photosynthesis is a fluorescent reaction in that the energy is received from the photon by captured by biological systems rather than be re-emitted.

Hm. I thought again. I remembered my tuneable pigment. Let’s say our pigment can absorb terrifically in its narrow tuned range but it can’t retain the photon as easily such that the photon is re-emitted. That’s what happens in fluorescent paints. Of course, if the photon comes in as blue and emits as green that’s not much of an energy gain. To make this worth it as many of the photons would have to be absorbed as possible and then re-emitted at as low an energy as possible.

Visible light is just what we see. It’s not magic. It’s the visible part of the electromagnetic spectrum. The spectrum goes up into gamma rays and down into microwaves. So I thought, let’s make them re-emit radio waves.

Cool, I thought. And put it away again.

Time passed and I was reading Hubel‘s work on visual systems. The eye captures photonic data but it’s the brain that makes sense of it. I wondered what it would be like to have a visual system that didn’t operate on the rules of optics. Radio waves, for example.

I dusted off the plants I’d thought up and then derived an alien biology that would take advantage of it. There are drawings of these guys in my notes, skulls that were laced with radio detecting proteins (likely with metallic cores). Opsins chemically resemble chlorophyll.

All opsins have a common heritage (see here) that is different from the evolution of chlorophyll. (See here.) But both chemical families harvest available light. I made the presumption that if radio waves were as present and as ubiquitous as light then biochemical systems would evolve to take advantage of them. I also made the presumption that animals who could detect their environment using radio waves would be selected for over animals who could merely detect visible light. Neither of these assumptions were provable but they made great aliens.

Okay. I had an alien biology and an alien ecology. Now I needed intelligence. Culture. Communication.

I was reading a lot about dolphins in those days and one article I read (which I cannot find, unfortunately) noted that dolphin sonar (like the sonar of bats) created the medium of perception rather than used one that was available. The article suggested that if dolphins were intelligent, they could communicate by actually producing an “image” of an object to show a receiver.

Oh, this was too cool to leave on the floor. I modified my Caliban aliens to be able to manipulate the radio waves they were receiving and seeing by– sort of like modern metamaterials, though I certainly didn’t think of them.

I now had an alien biology. But I still had to create an alien culture.