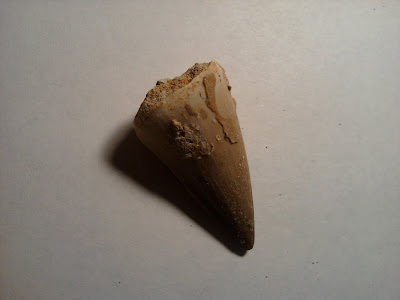 We were on vacation last week. We spent a couple of days in New York City. Then, we went down to Colts Neck, New Jersey. Horse country. Gentleman Farms.

It turns out that New Jersey was largely underwater during the Cretaceous period and the sedimentary rock preserved them. A good discussion of the Big Springs are in Monmouth County is here. A good ID sheet is here.

We found many things. I have here some incredibly poor pictures I took with my android. I will be putting up better pictures as they become available.

Fossil hunting in this area essentially meant wading through streams for about six hours. Much of it was an exercise in frustration since for the longest time all we found were oysters. Oysters the size of my fist. Oysters curled over on themselves. We took a few but left the Oyster Graveyard largely intact.

The first picture is of a mosasaur tooth– the prize find of the area. This one we purchased in the city from Maxilla and Mandible to act as a standard against which we could compare our finds. We did not find mosasaur teeth, though there was a rock that resembled one. We did find many other things. 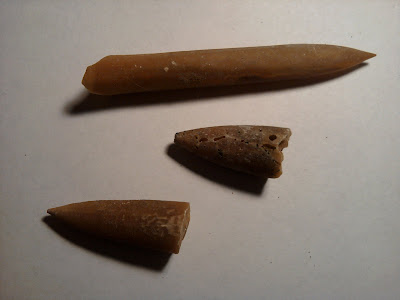 Since this area was largely underwater, there were a lot of invertebrates. These were mostly clams, oysters and belemnites. Belemnites were an odd sort of nautiloid mollusc. The fossil is of the guard component of the body. At first we thought they were some sort of manufactured item– a brown semi-translucent material like a ceramic of sorts. But we kept find them. And finding them. The longest in this picture was about 2.5 inches but we read about ones much, much longer.

We also found ghost shrimp burrows. At first I thought these were crinoids but they were much earlier. These were the fossil relics of a tiny shrimp that made tubes in the sand.

The site we were investigating was cut in half by a bridge and we’d been crawling over the downstream section. Somewhat discouraged (No teeth. No bones. Nothing but invertebrates as far as we could see.) we were going to find another site. But I was looking upstream from the bridge and I got to remembering the Joggins site.

Joggins was a nice Mississipian site in Nova Scotia we’d visited a few years ago. Great site. Cycads falling out of the cliff. If you found it on the beach and could carry it you could keep it. We’d walked down to the beach and turned left, wandered all over the beach and had a great time. Then went back to the hotel. Later in the trip, down in Parrsboro, we talked to someone more familiar than we were with the site and found out that the best fossils were on the right side of the beach. Including a famous Cycad fossil perhaps twenty feet tall.

We walked up and met a fossil collecting Jersey native, Doug Wells. Who showed us what to look for and how to find it. That’s when we started finding some really interesting things.

For starters, we found many shark teeth. Goblin sharks. Crow sharks. Many sharks as shown here.

We also found a “saber toothed salmon” (Enchodus petrosus) and a remnant of a fossil claw, shown here.

This was pretty much all we expected. But Ben and I found actual vertebrate bones. At least two and maybe four.

The two black stick like things are fossil bones. The white one is an unfossilized tooth.

These pictures are poor. The left most bone looks to me like a tibia. The middle bone a humerus. Though they were found close to one another in the stream bed, I don’t think they were from the same animal. The humerus is pretty much intact: both ends show joint articulations. The tibia is broken part way. I’d like to show these to a paleontologist.

The last two may or may not be skull fragments.

I, of course, don’t know this for a fact. These are two pictures of the fragments from the outside and inside. At first, I thought they were eroded oyster shells but we had seen few oysters at this section of the site. The broken edges look like bone to me rather than the edges of shells. Again, I’ll have to show these to a paleontologist to properly identify them. Which means better pictures.

I haven’t looked at any of these finds under a microscope yet. I expect that will be fun.

There was also a zinc mine trip we took but that’s for another blog entry.