While writing yesterday’s post about life and unexpected twists, I was reminded of a truly amazing discovery I made three years ago. A discovery so unexpected, so startling, and so personal that, even today, it stirs emotions just to think about it.

I’d noticed a lot of hits on my website coming from a BBC site. Being curious, and hoping it was the BBC announcing they were going to turn Resonance into a TV series, I clicked on the link. And found … not a TV series but … my father.

I read further. It was an interview with an able seaman talking about the war, North Atlantic convoys and the day HMS Bulldog captured the German submarine U-110. My father was listed as one of the eight men mentioned in despatches for their part in capturing the submarine.

I was amazed. I’d known that my father had been ‘mentioned in despatches’ but had never been able to track down what for. His service record didn’t say – which the MoD admitted was strange, even more so that the despatch was written by the First Lord of the Admiralty – but my father had never spoken of it. My mother had told me that once, after a large amount of drink, he’d started to tell her about something he’d done in the war that had saved a lot of lives but he’d denied it all the next day and insisted she never speak of it again. He died in 1960 and the secret went with him. Until that day three years ago.

I Googled ‘Bulldog’ and ‘U-110’ and found out more. My father was one of the nine men who retrieved the Enigma machine. The machine whose capture led to the unravelling of the German Enigma code. Winston Churchill called it the turning point of WWII. Britain had been close to being starved into defeat. There was only three weeks of food left in the country and vital North Atlantic convoys were being sunk by U-boats.

I kept reading. In May 1941 U-110 had been attacking a convoy when it was engaged by the destroyer HMS Bulldog, damaged by depth charges and forced to surface. Unable to use its main guns HMS Bulldog steamed in to ram the U-boat. The German crew abandoned the damaged sub leaving the enigma machine still connected as the captain believed the sub was about to be rammed and would certainly sink. But the captain of the Bulldog, realising the possibility of capturing the U-boat intact, veered away at the last instant.

A five-oared whaler – a large rowboat – was lowered by hand from the Bulldog and nine men were sent to take the sub. Above is a photograph of the U-boat and the destroyer lowering the whaler into the water. Count me further amazed that there are actual photographs of this event!

And here’s a photograph of the whaler heading for the U-boat. Thanks to a conversation I had last year with Jimmy Green, who’d been a sailor on board the Bulldog at the time and knew my father, I can actually identify my father in this picture. He’s the coxswain at the back.

The commander of HMS Bulldog wrote the following report:

H.M.S. Bulldog stopped within 100 yards of the submarine and sent away an armed whaler’s crew. No sign of a white flag was seen and two men appeared to be manning the submarine’s forward gun. Fire was again opened by Lewis gun and two or three men were hit. My object was to keep the crew rattled. They already appeared dazed and uncertain what to do. By the time the whaler was alongside the submarine, the whole crew appeared to have jumped into the water. There was a moderate sea running and waves were breaking over the U. boat’s deck. The officer in charge of the whaler, appreciating the necessity of speed, ran his boat hard on board the submarine and a wave carried it on to the deck where it was smashed. The crew found that the conning tower hatch was closed. They opened it and went below without delay. (Their orders were to seize all books and anything that looked important).

The men stripped the slowly sinking sub, throwing the material – including the Enigma machine and codebooks – to another whaler that pulled alongside. The sub could have sunk at any time. It should have sunk but, for some reason, the explosive charges rigged to scupper the submarine didn’t go off.

The boarding party then tried to secure a towline from the Bulldog but the tow snapped. Which was lucky as Bulldog had to break off to engage another U-boat. The nine men battened down the now listing and slowly sinking sub as best they could and remained on board for another five hours while HMS Bulldog and HMS Broadway engaged a further six U-boats. 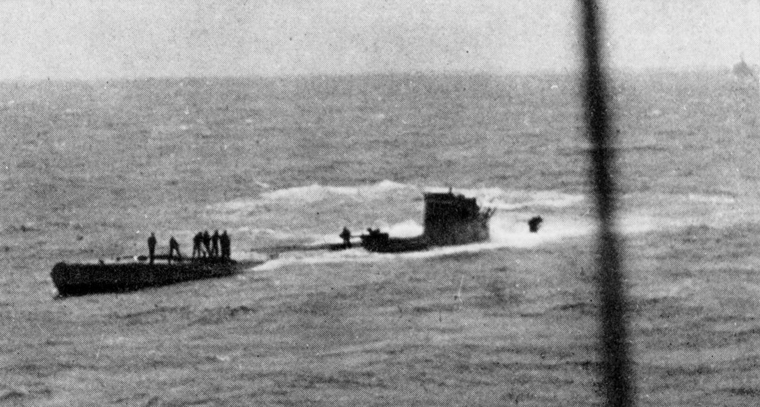 Here’s a photograph of the boarding party attempting to secure a towrope to the U-boat. When the Bulldog returned, a towline was secured and the destroyer was ordered to make for Iceland. The next day the Admiralty changed their minds and ordered the sub to be ‘accidentally’ scuppered in case the Germans discovered its capture. All the men involved in the action were sworn to secrecy. A secret that some of them took to their grave.

The enigma machine and codebooks were taken to Bletchley Park and the rest is history.

Isn’t the Internet wonderful? Thanks to my original blog post, I was contacted by a relative of Jimmy Green who’d served on the Bulldog with my father. He told me my father had been the coxswain of the boarding party and had played a pivotal part in the capture of U-110 – more so with the codebooks than the actual enigma machine.

F. H. Hinsley, a cryptanalyst at Bletchley Park during the war and the leading expert outside Germany on German naval codes, wrote in 1992:

What was worth more than a thousand Enigma machines were the documents found on U-110. What was priceless and really did shorten the war and was the key to winning the Battle of the Atlantic, were the complete bigram tables for the naval Enigma.

Chris Dolley is an English author living in France with a frightening number of animals. His novel – Resonance (Baen) – can be downloaded for free here. More information about his other work can be found on his  BVC bookshelf .

Recently released from Book View Press: International Kittens of Mystery. If you like a laugh and looking at cute kitten pictures this is the book for you. It’s a  glance inside the International Kittens of Mystery – the only organisation on the planet with a plan to deal with a giant ball of wool on a collision course with Earth. Forget  Bruce Willis and his team of miners. Send for the kitties!