Marion Zimmer Bradley had published several novels set on the world of The Bloody Sun when I first discovered Darkover with The World Wreckers (1971).

The Planet Savers and The Sword of Aldones had come out in 1962, followed by The Bloody Sun (1964, revised in 1979) the YA Star of Danger (1965) and an Ace Double, The Winds of Darkover (originally entitled The Wings of Darkover!) (1970). The early Darkover novels were action-adventures, solidly written but also well within the fantasy genre. The World Wreckers (1971) pushed the boundaries of acceptable topics. Although a secondary plot, the evocative love story between a Terran man and a hemaphroditic chieri brought up issues of sexuality and gender in ways I had never before read. I believe it was Marion’s first “breakthrough” in the Darkover series, and it firmly established me as an avid fan.

The next two Darkover novels added depth and complexity to my experience of Marion’s special world, and I admired Marion tremendously for not shrinking from presenting provocative questions. In Darkover Landfall (1972), she confronted a shipload of

marooned colonists not only with a strange world and their deepest fears, but the necessities of survival. To the outrage of many in the burgeoning feminist movement, Marion depicted a situation in which, for the human colony to have a future, every woman of child-bearing age must contribute to the gene pool. She went on to ask what kind of cultural mores — towards monogamy, towards intergenerational sexual relations — would then evolve. The Spell Sword (1974) continued the idea of telepathic intimacy and non-exclusivity.

The next year, 1975, saw the publication of The Heritage of Hastur, considered by many to be the definitive novel of Darkover. Marion had set out to write a novel featuring a

sympathetic and heroic gay protagonist: Regis Hastur. She took a character from an earlier novel (The Planet Savers) and placed him not only under the pressures of an heir-apparent, but in the cross-hairs of a story of power and its abuses. She followed up the next year with The Shattered Chain. Having created a world in which most women had little power or freedom, she showed how even under the most oppressive circumstances, women do have choices. Her depiction of the Free Amazons or Renunicates was so compelling that women set up “Guild Halls” and even changed their names to the Renunciate form of daughters of their mothers.

About 1980, Marion and I became personal friends and soon thereafter, she bought a story from me for the first Sword & Sorceress. 1984 marked my first sale to a Darkover anthology. Marion had long considered fandom her community and welcomed others to explore Darkover and edited a series of anthologies based on that world until the increasing legal complications of copyright ended such openness.

When I heard Marion was reading for a Darkover anthology with a Free Amazon theme, I concocted a tale of justice and revenge, impossibly grim and melodramatic. Luck was

with me, for I never submitted it. While visiting my mother, I was struck by a hilarious idea–a Free Amazon, while traveling in the Hellers, accidentally imprints a newly-hatched banshee chick. Banshees are giant carnivorous birds, vile and smelly, who haunt the mountain passes and prey upon unwary travelers. The idea of a hapless woman pursued by one of these flightless monsters who thinks she’s its mother, was too hilarious to resist. The story wrote itself and Marion approved.

Other tale followed, and another. Some were grim, others light-hearted, although none so demented as “Midwife” (Free Amazons of Darkover, DAW 1986). With each successive story for the Darkover anthologies, I ventured more deeply into a new world. The challenge was to discern and remain true to Marion’s vision while also remaining true to my own creative voice, to tell the stories that were mine to tell. Occasionally, a story would push and tug at me, pleading to continue beyond its final pages. This was especially true for “The Death of Brendon Ensolare” (Four Moons of Darkover, DAW 1988). Alas for the “inelasticity of typeface,” to use Marion’s phrase.

Writing an entire novel set on Darkover was another adventure entirely. In my own 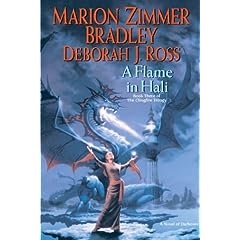 novel-length work, I was used to world-building, creating cultures and landscapes and histories as well as characters. When asked what it is like to write “on Darkover,” the only reasonable answer is that it is akin to writing historical fiction. The world is there, so I cannot invent it as I go along. Marion, on the other hand, did not always envision Darkover in the same way she did when it was mature. So when I do research, I keep in mind when this particular story was written. Marion never let details of geography interfere with a good story, so she refused to create any maps. Others have attempted it, always with imperfect results. I try to follow Marion’s lead in focusing on a satisfying and complete story experience, rather than trying to reconcile incompatible details.

Following Marion’s example, I have tried to create each novel as complete in itself, even when part of a larger story arc. So, although the first three we worked on together, “The Clingfire trilogy” was marketed as a series, the books can be read separately, with the one caution that it is best not to read the third (A Flame In Hali) before the second (Zandru’s Forge) because they are chronological and involve many of the same characters.