So I’ve been besotted by Maine Coons since the first time I laid eyes on one, okay? I mean, please don’t take this the wrong way because I have loved every cat who ever shared a slice of my life with me, some of them for far shorter a time than I might have wanted – when the cat-of-my-heart Boboko left me at only nine years of age I was devastated for a year – this is him: 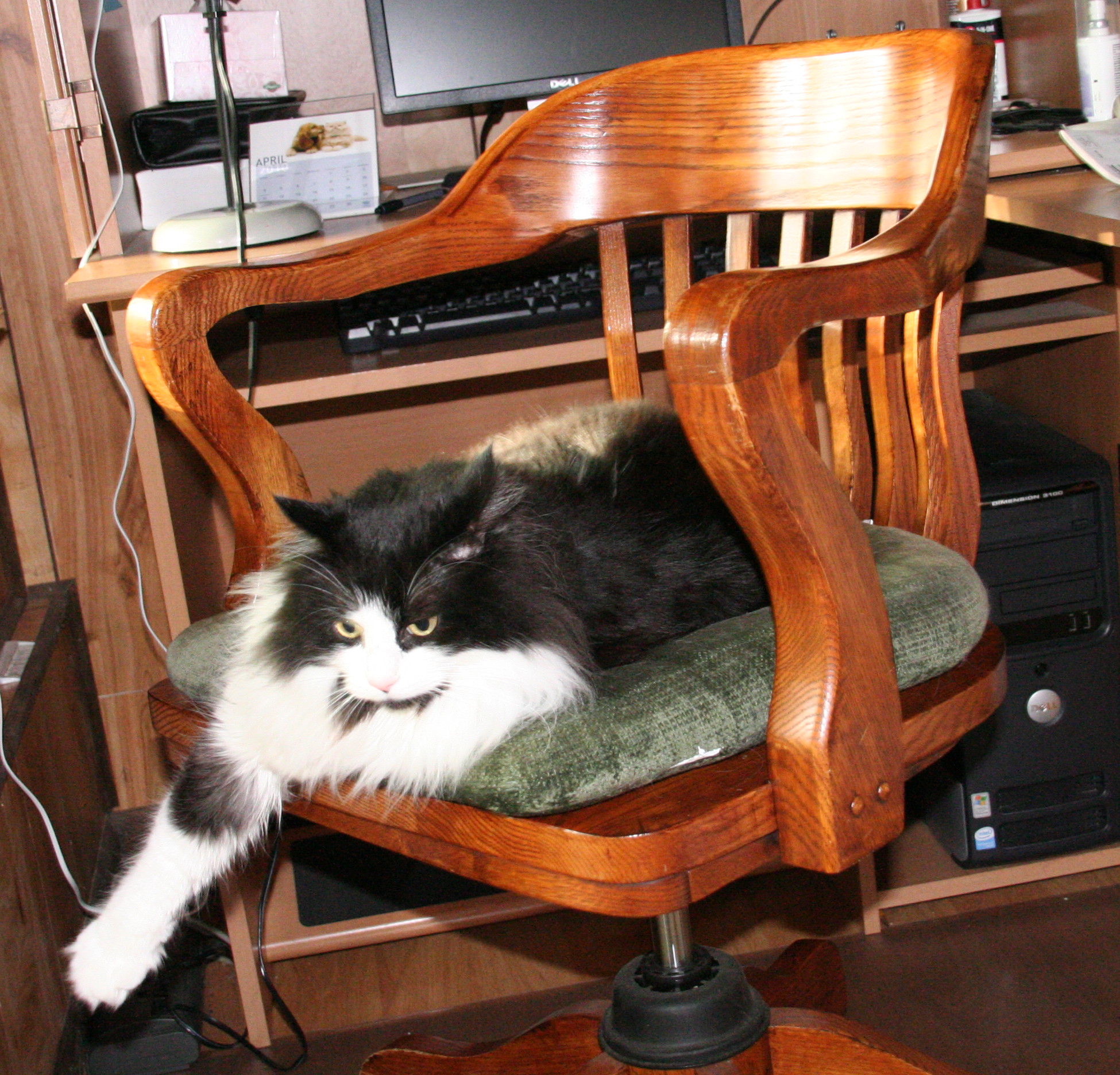 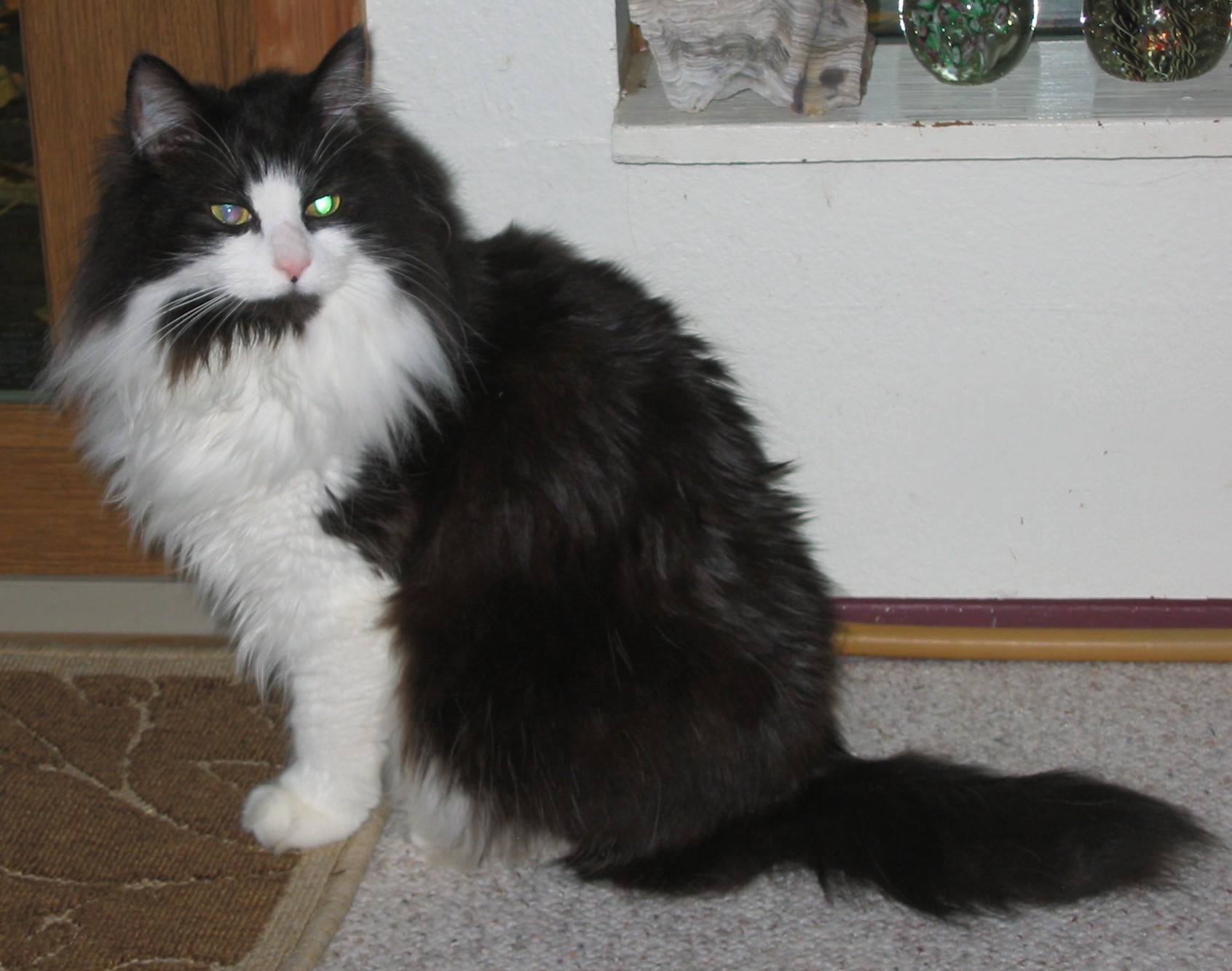 You might say that he looks rather a lot like a coon cat and you’d be right, I called him my coonlet, but he was tiny, he never weighed more than 10 or 11 pounds, and once you plunged your hands into all that fluff it was a long way down before you hit cat.

He left behind his sister, full littermate and bonded sibling, and she lived here alone until my heart healed enough for me to consider adding a companion. That was when Blackjack, the Little Emperor and my current companion, ex-feral street moggy with one congenitally wrecked eye to the point that he is quite literally a one-eyed jack, came in. He and Laptop, Boboko’s tuxie sister, lived companionably together until March of this year. That was the month that Laptop simply gave up the ghost abruptly one day, at the ripe old age of 19. I dearly wanted her to make 20 but it was not on the cards.

Blackjack was now on his own.

He and I weathered the last two years of mourning together, him being a comfort to me in teh wake of Deck’s loss to the point that I cannot even describe – he was with me, always, in every way, just there and loving and present and not minding in the least if I picked him up and wept into his fur when it became too much to bear. He was a sustaining spirit. He was a support all the way. And then Laptop died and he became an only cat and it all just focused on him even more because he was the only thing I had left in this house, my last link to Deck (and Blackjack chose us BOTH).

And then I thought about Coons again.

Let me not get into too much of a sad story here but I initially sought out rehoming groups online… and got ROYALLY scammed by one of them. I thought I was getting a coon cat… right until the moment I realised I’d paid money which I would never see again and the cat did not exist.

A friend who is owned by FOUR Coons then suggested that a better way would be to approach local TICA-accredited breeders and see if they had cats they needed rehomed. He found me a few names. I went to one site and it had a questionnaire for potential adoptees, so I filled it out, just on the off chance – but Coon kittens were going for four figures on these sites and that wasn’t something I could consider and I just filled the questionnaire in blind faith, as it were.

And then the breeder whose questionnaire it was contacted me and told me that another breeder, a friend of hers, had read my answers to the questionnaire and had liked them and that she had a retiring show queen called Avalanche who was looking for a new home and was I interested.

I contacted the lady in question. We exchanged a few emails. she sent me the picture of a most breathtakinly lovely creature who was a national Grand Champion and the third-best Coon in her category in an international competition – she would have gone higher but Covid cut her show career fairly short. She did her duty by producing a litter of line-sustaining champion kittens (I’ve seen photos they are adorable) and then, her owner told me, she was going to get spayed this november and after that if I wanted the cat she was mine.

On a Saturday morning in early December, a cat called Avalanche was delivered to my house where her breeder and owner wept at surrendering her because she was beloved. And then her ex-momma left, and that night transferred Ava’s microchip ownership details to me, and I was the proud new human owned by a BEAUTIFUL Maine Coon.

Things I have learned so far – they TALK, a lot; this particular one makes endearing air biscuits when she is petted; she is GIGANTIC (I didn’t know cats WEIGHED this much; she is named Avalanche for a reason; and I really have to learn how to groom a cat like this properly because she is very unlike my precious little coonlet named Boboko in that this is a massive machine made of pure muscle and she has the turning circle of the Queen Mary and when she starts in one direction it is difficult to stop her momentum (and when she does not want to be groomed she does. Not. Want. To. Be. Groomed.) Her favourite thing currently is climbing to the back of my office chair, and then sliding down the back of the chair until she is between me and the backrest, wedging herself firmly in, and then curling around to park her front feet and that massive leonine head in my lap.

Lynx feet, massive and hairy. Elegant championship-earning tufted lynx ears. Magnificent silver coat. And yet this is a cat who lies there with her tongue out in a blep and looks dorky as all get go.

I have my own Coon cat.

I am stupidly grinning right now. 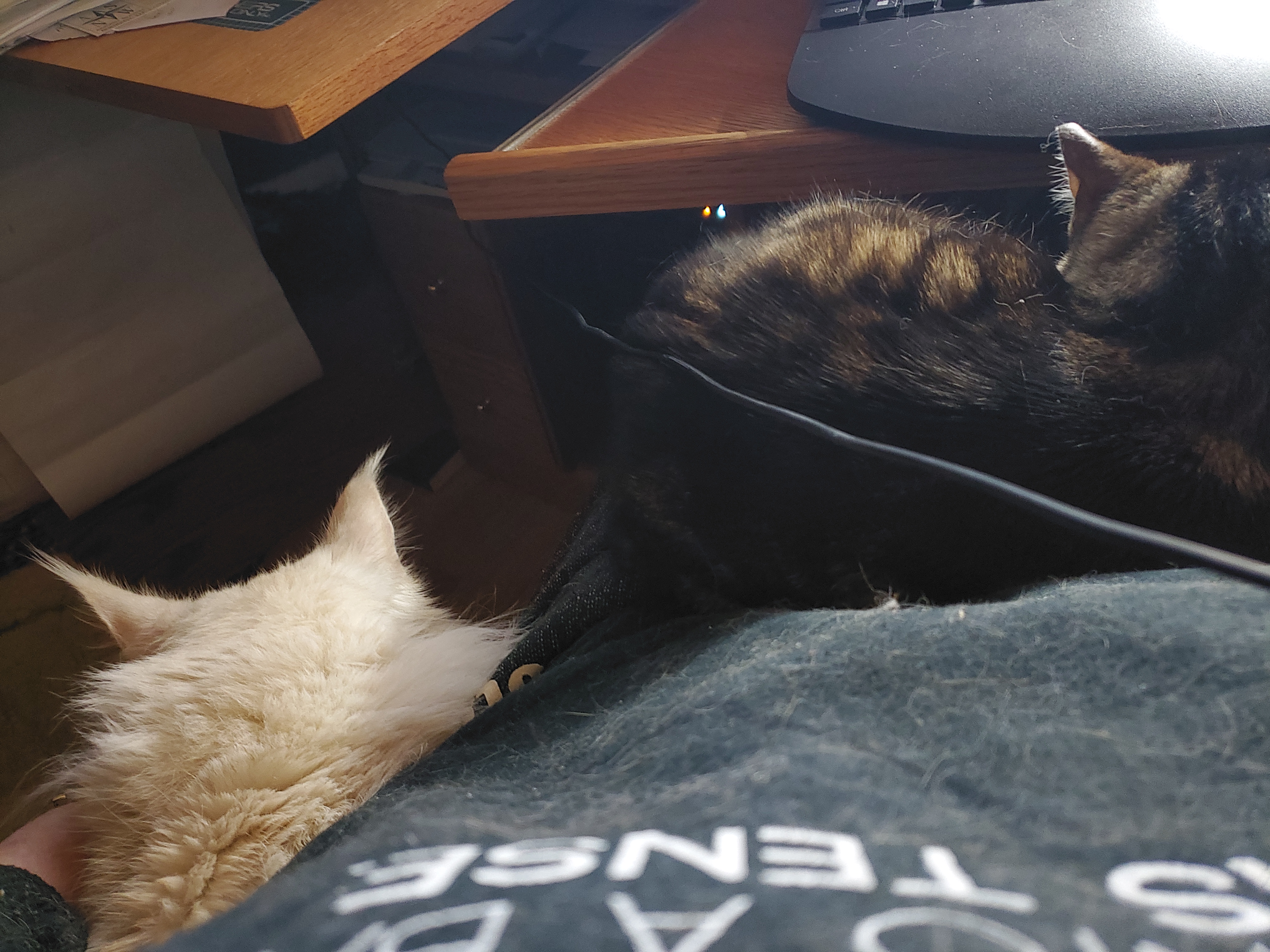 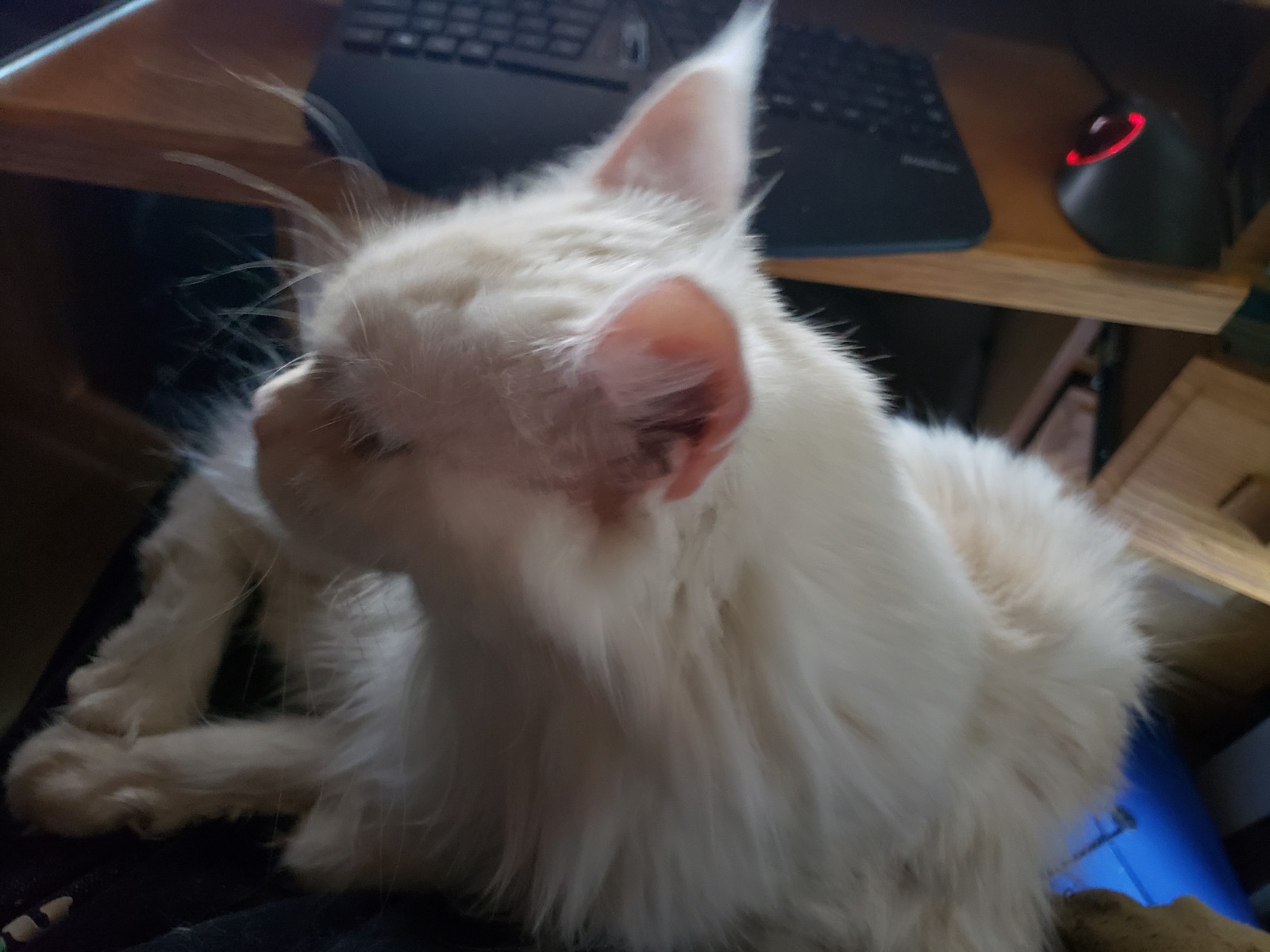 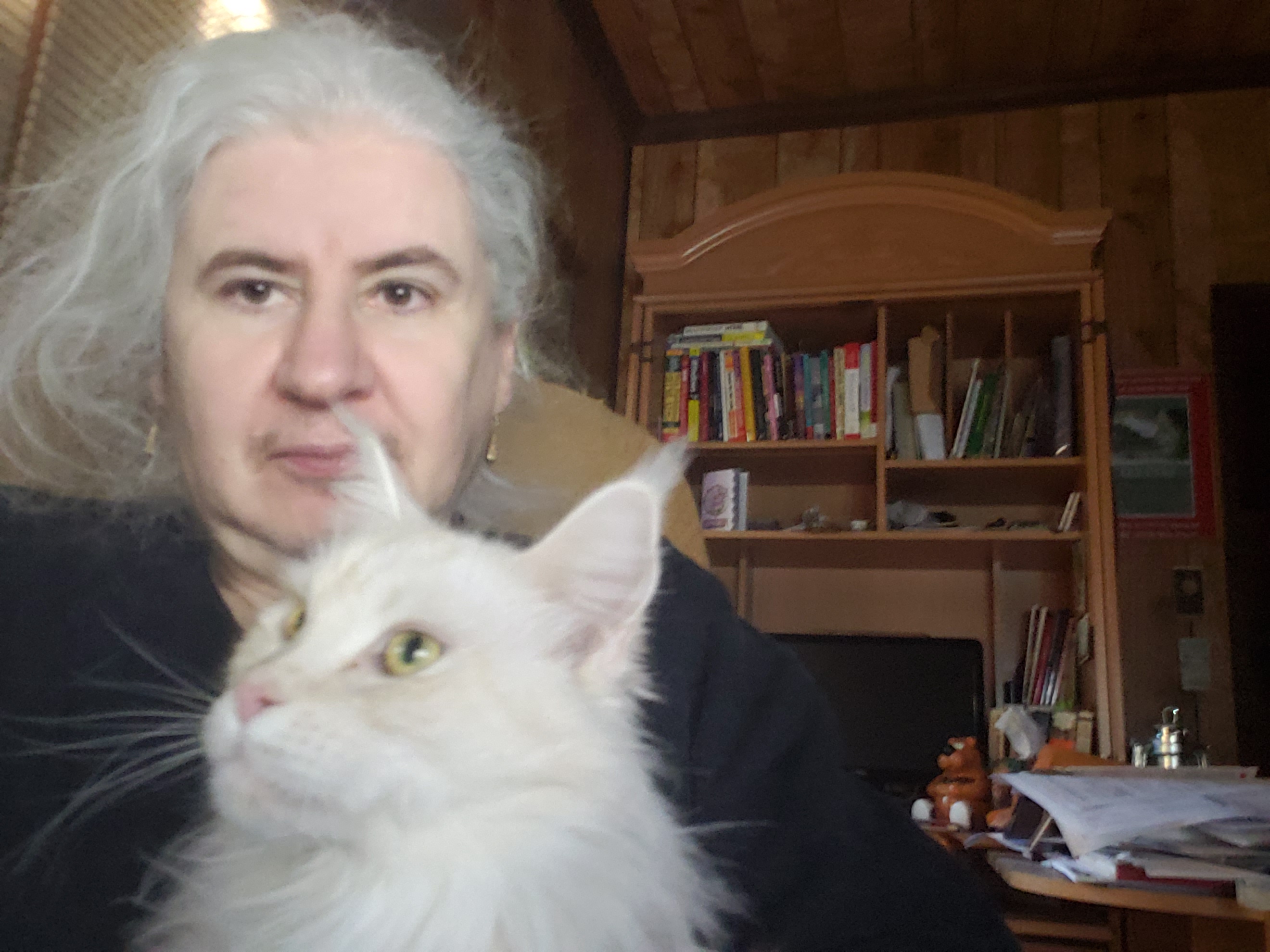 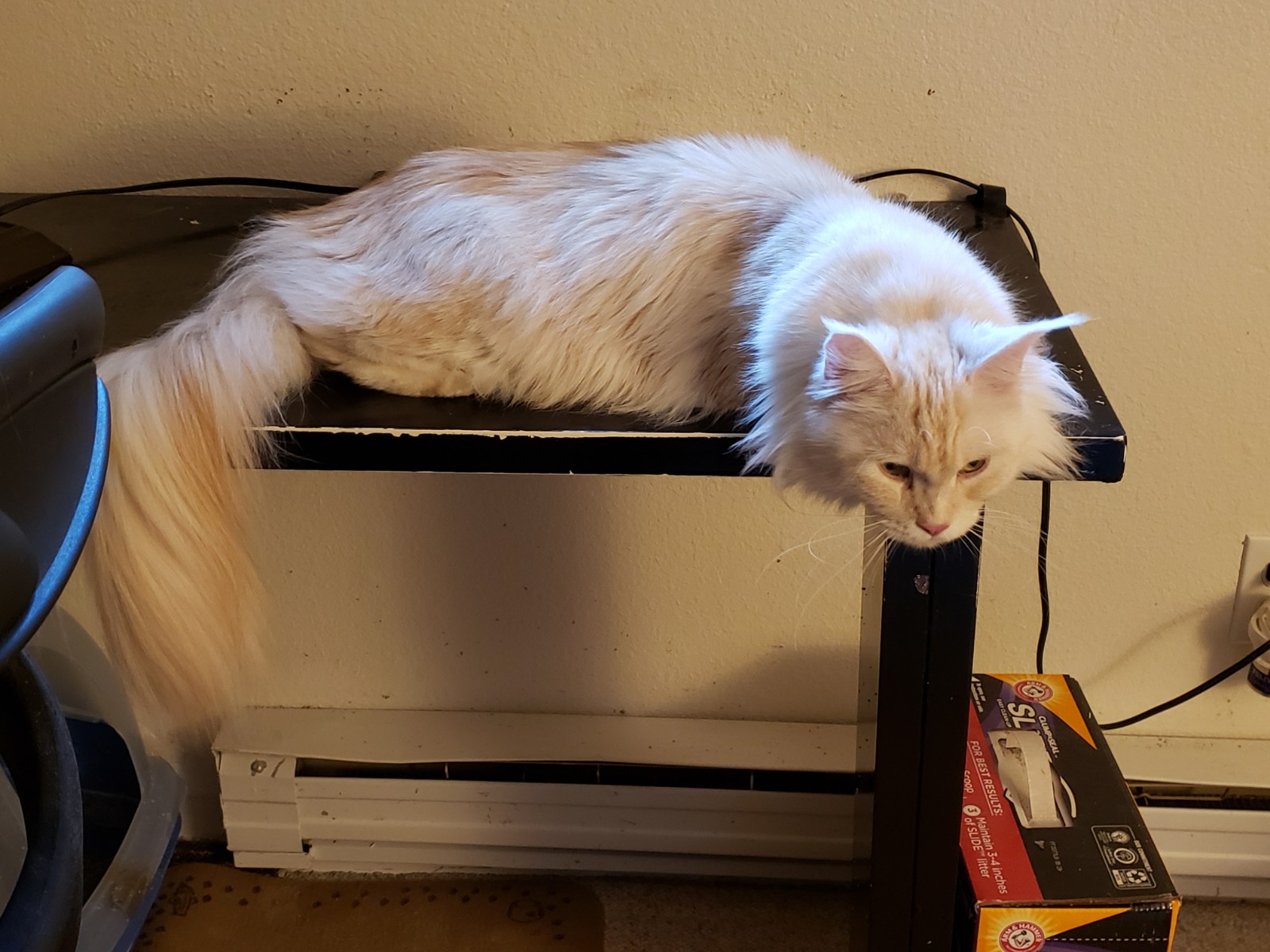 I have a Coon.

2 thoughts on “A Cat Called Avalanche”