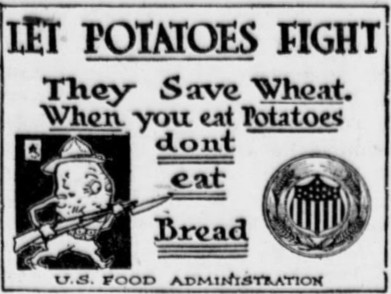 On the United States’ entry into World War I in April 1917, the military wasn’t the only thing to mobilize.

Under the direction of future president Herbert Hoover, the U.S. Food Administration jumped into action to convince America’s housewives that they could have a positive impact on the course of the war by conserving food, so that not only American troops would be well-fed, but also the millions in Europe for whom getting enough to eat was a daily struggle. This wasn’t pure altruism; as Hoover wrote, “Of course, the prime objective of the United States in undertaking the fight against famine in Europe is to save the lives of starving people. The secondary object, however, and of hardly less importance, [is] to defeat Anarchy, which is the handmaiden of Hunger.” By “anarchy”, Hoover meant communism, to which Russia had fallen in 1917. 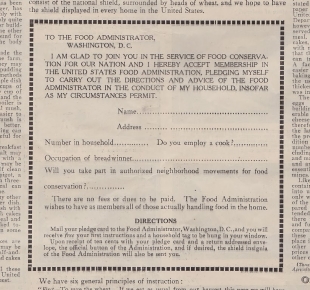 “First–To save the wheat. If we eat as usual from our harvest this year we will have little more than enough for our own supply, but we can divide with our allies if each individual makes some sacrifices by eating at least one wheatless meal a day, substituting corn bread or other cereals.

Second–We want to save the meat, for our cattle and hogs are decreasing, and we must send to our allies, so we wish every householder to buy less, to serve smaller portions and to allow no waste.

Third–We wish to save the fats. We consume three times the fats that are necessary for nutrition, and we need them now for war. We wish no butter used in cooking; we want less butter served on the table; we want less lard, bacon, and other pork products used.

Fourth–Any deficiencies in food supply, by economy along the above line, can be amply covered by increasing the use of fish, potatoes, beans, peas, turnips, cabbage, and vegetables generally, corn, buckwheat, rye, and rice, which we have in abundance this harvest.

Fifth–We want to save transportation. Our railways are unable to meet the war pressure for munitions, men and coal, so that we wish every one to consume products of local origin as far as possible, to buy from the local miller, the local packer, buy and eat vegetables grown near home. Aside from eating an increased proportion of these commodities in order to save on the staples, it is extremely important that any surplus of these commodities shall be preserved or well stored for winter use.

Sixth–We preach and want everyone to preach ‘the gospel of the clean plate;’ to buy less foodstuffs, to serve smaller portions, and to see that nothing of value goes into the garbage can.”

This movement to conserve food was driven by a huge advertising blitz. Women’s magazines in particular ran numerous articles on eating locally produced food, eating more fruits and vegetables and poultry and dairy products, which could not easily be transported overseas at this time, cutting down on waste in general and abstaining from certain foods on certain days, hence “Wheatless Wednesdays” and “Meatless Mondays” (foods like cottage cheese and egg dishes were suggested to replace meat).

To make it even more official, housewives could sign a food conservation pledge and receive a special placard to display in their front windows proclaiming that they were doing their bit for the war effort—a clever bit of psychosocial pressure. (That’s the pledge above, from the August 1917 issue of Today’s Housewife). 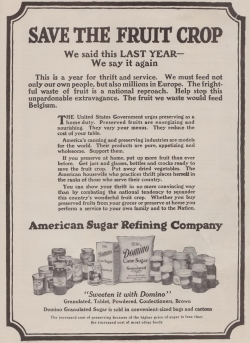 Even advertisers jumped on the conservation bandwagon: companies like Domino Sugar ran ads stating that it was every American woman’s patriotic duty to preserve and can fruit to keep it from waste …using Domino sugar, of course (from McCall’s, August 1917).

And of course, the magazines were full of recipes and suggestions on how to conserve food. In my next post, I’ll show you how to make an Eggless, Milkless, Butterless Cake (yes, really), and more.