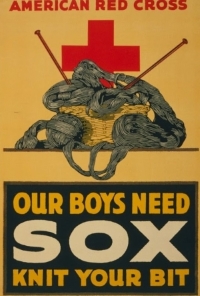 When the United States entered the war in April 1917, the government put out the call: Uncle Sam wanted young men to enlist…and he wanted everyone else to knit. The armed forces needed sweaters, vests, mittens, wristlets, caps, helmets, scarves, and above all, socks.

Much of the war was fought from trenches, where conditions were muddy and wet and in winter, muddy and icy. Army boots were made of thick cowhide which was supposed to be water repellent; unfortunately, their uppers had a tendency to come unstitched from the soles. Furthermore, their iron heels and rows of hobnails to provide traction in all that mud conducted cold directly to the feet. To protect their feet, soldiers wore boots two sizes too large and two pairs of thick woolen socks, and changed their socks as frequently as possible in order to avoid “trench foot”, a highly unpleasant fungal infection. Take into consideration that the goal was to send at least million Americans across to fight, and you get an idea of the numbers of socks needed. 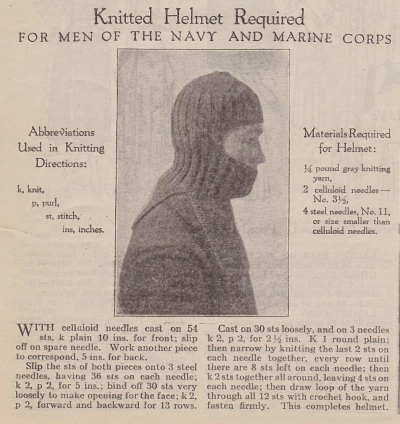 In the summer of 1917, the government asked America’s knitters for one and a half million pairs of socks for “our boys”, as well as an equal number of sweaters, mufflers, and wristlets (rather like mittens that left the fingers free; after all, it’s hard to pull a trigger with covered fingers.) America’s knitters heeded the call. The American Red Cross undertook organizing the distribution of yarn and patterns to volunteers and the collection and shipping to Europe of finished items. Women’s magazines also published Red Cross-approved patterns, like this helmet from the August 1917 edition of Women’s World.

Women (and men) who didn’t know how to knit were taught. It became socially acceptable to knit everywhere: at work, at school, on the bus, at social events, in theaters, and even in church. As college campuses emptied of young men, the young women left behind knit for them; professors were exhorted to allow knitting during lectures. The Junior Red Cross set up knitting programs across America to teach schoolchildren to knit, and those who didn’t learn were encouraged to “Do mother’s work so she can knit” and “Be careful of  my clothes so that mother will not have to patch, but can knit.” Those who, for whatever reason, didn’t take up knitting, were encouraged to buy yarn for those who could but could not afford materials.

That yarn was, of course, gray or khaki colored; it became socially unacceptable to be seen knitting anything in any other color. As an article in the University of Washington Daily stated, “When news comes that American soldiers [sic] have died merely from exposure in walking the icy decks on their watches, every stitch on a pink sweater will seem selfish.”

PrevPreviousA Hero For All Ages
NextNew Worlds: Foundations of SlaveryNext